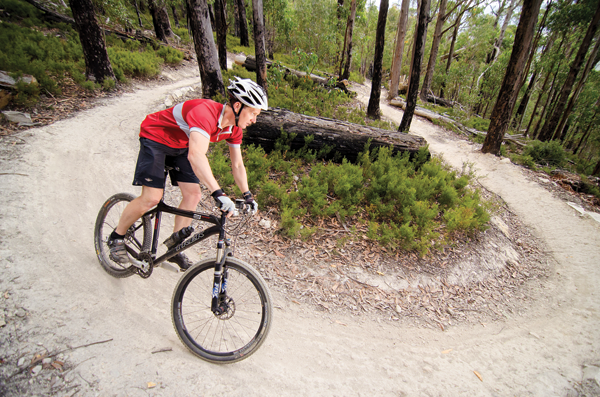 “Large paved areas are rolled over and logs ducked under. One of the larger logs on this section was hand excavated with the route underneath paved using local rocks as a scenic alternative.”

Tasmania has embraced mountain biking as a great sport and a valuable tourism opportunity. Hobart local Keith Macqueen looks at the trail that could well be their crowning achievement thus far.

Just outside Hobart and carved into the steep slopes of Mount Wellington lies the North South Track. Officially opened in December 2011 the North South Track is an incredible achievement—it shows what can be done with extensive planning, hard work, skill and money. Now, only 15 minutes drive from the city centre is the finest, hand-built MTB singletrack that Australia has to offer. 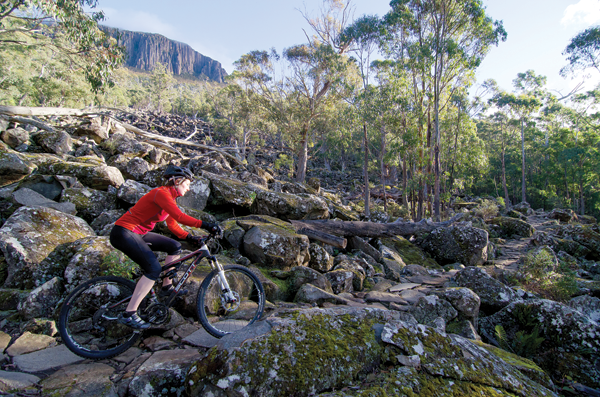 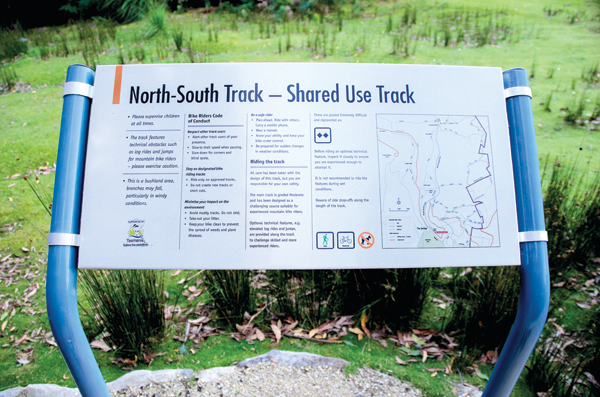 Project leader, Richard Greenhill, estimated the cost of the track at $1.3 million. Hobart City Council and Sport and Recreation Tasmania donated most of the money with volunteer group ‘Green Corps’ chipping in with a significant amount of time. Funds have also been allocated for the ongoing maintenance of the track. Both David Mason, team leader of the track’s construction and his colleague Simon Wyatt from Mtn. Trails have worked tirelessly throughout Tassie’s wet and cold winter to ensure that the North South Track remains in top condition. 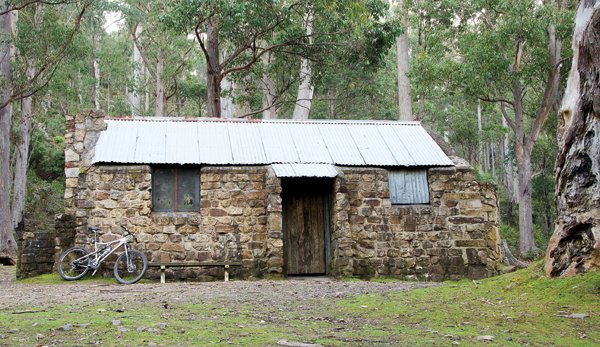 Building the track has been a ‘work in progress’ for some time. Construction began in 2006 and was split into four different stages; this allowed different sections of the track to be ridden and reduced riders’ frustrations in waiting for the track to be fully completed.

In true Tassie style the track was built to minimise its environmental and historical impact. Nearby rocks were used to lay the foundations and shape the track’s unique rock walls and log rides. Surveys of threatened species were conducted and investigations into Hobart’s national and cultural heritage were undertaken. During these investigations one of Hobart’s oldest walking tracks, New Town Way, was found to cross the proposed North South Track. To protect this historic track, approximately 50 tonnes of rock was painstakingly wheelbarrowed to the area and laid across the track! 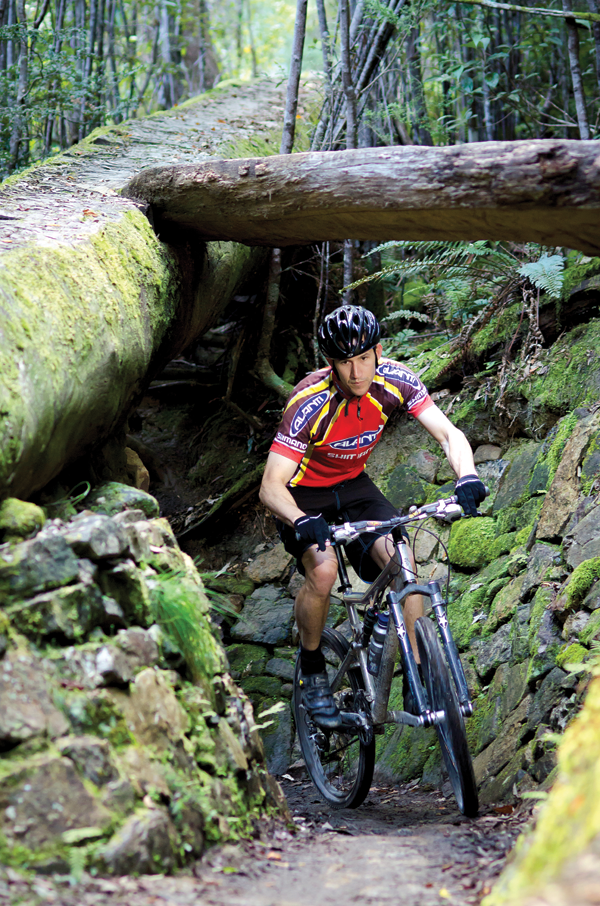 Whilst the North South Track is for shared use, the principal purpose and design remains for mountain biking. Based on International Mountain Bicycling Association guidelines, it is rated as a ‘blue’ track (rough sections and steep climbs; some pushing likely; suitable for experienced mountain bikers). Prior to the North South Track most of the mountain biking on the side of Mount Wellington consisted of arduous climbs and steep but brief descents. By comparison the North South Track is very moderate. It averages eight to 10 per cent with a number of gradual climbs, so best keep your downhill bikes at home. Interestingly, the gradient of the main descent was based on the popularity of the Lenah Valley Track. Riders had previously indicated that this track (albeit a walking track) was one of their favourites.

Determining exactly where the track would go was a time-consuming process and many hours were spent battling through dense scrub, slipping over wet, mossy rocks and clambering through large boulder fields. It took over an hour for David Mason to walk one 500 metre section, which resulted in only a few minutes worth of riding once the track was completed! The initial obstacles provided good building materials. Flagstone paving and countless rock walls were jigsawed together to create a solid and impressive erosion-free track. 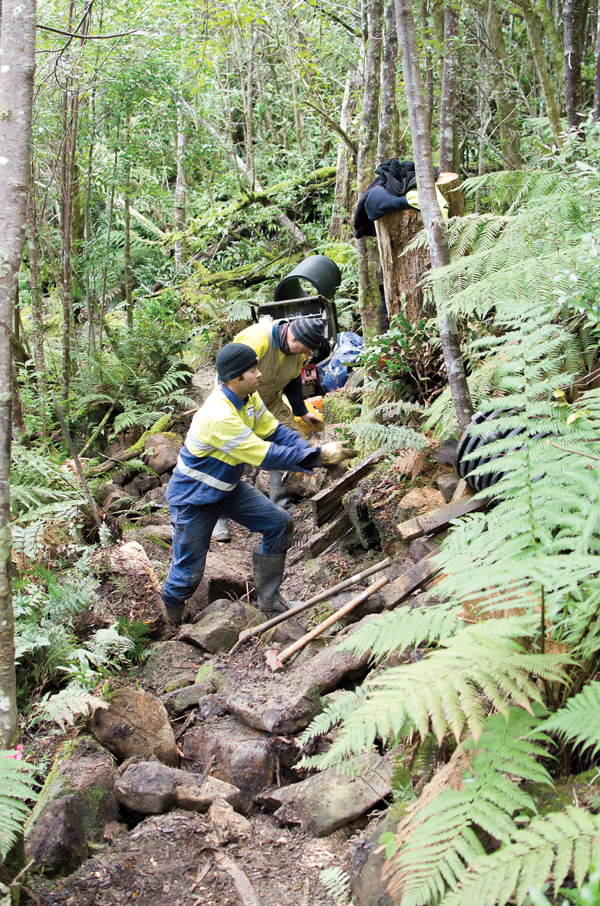 The trail crosses many watercourses so good drainage was critical to prevent erosion. Simon, one of the track workers commented upon the fact that although it wasn’t too pleasant working in the pouring rain it allowed them to check the drainage of their construction and ensure that it was functioning properly. Now that’s dedication for you!

Engineers faced a major dilemma when the trail approached the New Town Rivulet; a prominent watercourse that’s prone to flooding. One option was a long, technical and expensive bridge. The other option, and the option ultimately chosen, was to utilise an ancient design called a ‘clapper bridge’. This involved a 2.5 tonne rock, which was hand-winched and dragged from upstream before being carefully fitted into position. Not an easy task! Now with the rivulet flowing beneath, this is one of the most beautiful parts of the track.

On the bike, the North South Track is a combination of fast, flowing lines, rocky outcrops and wooden bridges. Thanks to the track builders’ attention to detail, mud and puddles are uncommon. With the varied altitude, climate and soil types, you’ll encounter a diverse spread of bushland; from wet forest, lined with huge man-ferns to open sclerophyll forest. 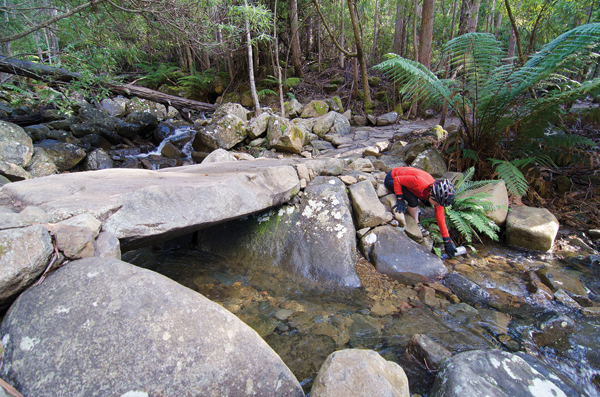 It’s a track that has been designed to accommodate all levels of mountain bikers; from the average recreational rider to the more experienced. Families can be seen enjoying a day out on the trail and getting their young children interested in singletrack riding. When I was there, young George, a nine-year-old local lad and beginner on the mountain bike, rode the North South Track with his Dad—it was his first ever singletrack experience. The side of the track is also dotted with a number of more technical options such as log rides and drop-offs, but simply staying on the track will keep you on your toes.

As a shared use track, it has been skilfully designed with good sight lines so that unexpected encounters with walkers and other riders are almost non-existent.

Starting at The Springs, the track immediately begins with some fun riding. For the first two kilometres, riders weave down a smooth and flowing bit of singletrack. Large paved areas are rolled over and logs ducked under. One of the larger logs on this section was hand excavated with the route underneath paved using local rocks as a scenic alternative. 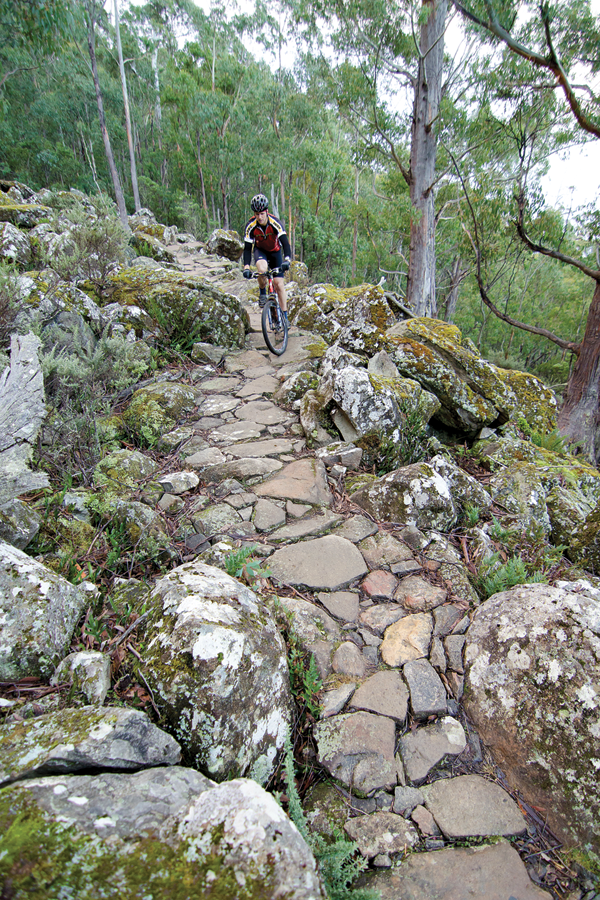 After the excitement of the first stage, the track enters a more rocky and technical stage. This was the original section of the track and extends to Junction Cabin. Here, there are many tight and rocky sections as you pick your way through large boulder fields and cross numerous small creeks on wooden bridges. This is also the section that contains most of the log rides and drop-offs. Take care in the winter months, as the logs tend to be a little slippery!

The last stage of the North South Track is the favourite bit for most Hobartians. Heading off from Junction Cabin, it flows downhill towards Glenorchy Mountain Bike Park. The drier sclerophyll woodland allows the trail to open up; speeds increase and the berms are plentiful—it’s difficult to wipe the grin from your face!

Towards the end you’ll cross the New Town Rivulet. Take a moment to admire the ‘clapper bridge’ as you top up and continue towards Glenorchy Mountain Bike Park. From here you can either bomb down the technical downhill track or continue to coast along the last kilometre of the North South Track. The final drop into the bike park is not insignificant so this is often chosen as the turnaround point for many riders. 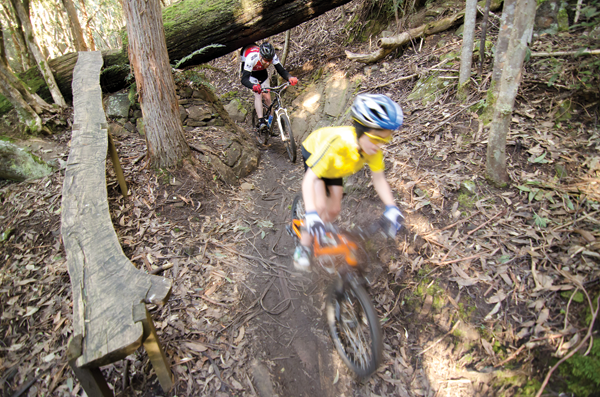 There are a number of options for riding the North South Track but for those unfamiliar with the Glenorchy trails, it’s easiest to start at the southern end with a simple out and back from The Springs. While it’s only 10.5 kilometres each way, start is at 700 metres and it’s close enough to sea level at the bottom, so the pedal back up is no walk in the park—for most it’ll be a solid two hour ride. Those who wish to take things a little easier can turn around above the Glenorchy trails, as this cuts out a sizable chunk of the climb.

Of course it’s easy to extend the ride by taking in the Glenorchy trails or by doing a lap of Radford’s Track at the top of the hill. Round loops are also possible, although these mostly contain fire trails and also involve a number of steep climbs and descents. The Wellington Park trail map is helpful for anyone who’s unfamiliar with the area.

There are numerous bike hire opportunities in Hobart and most are accessible online. The North South Track is within riding distance from Hobart if transport is an issue. In fact, most local riders start from the city centre anyway to give themselves a solid workout! 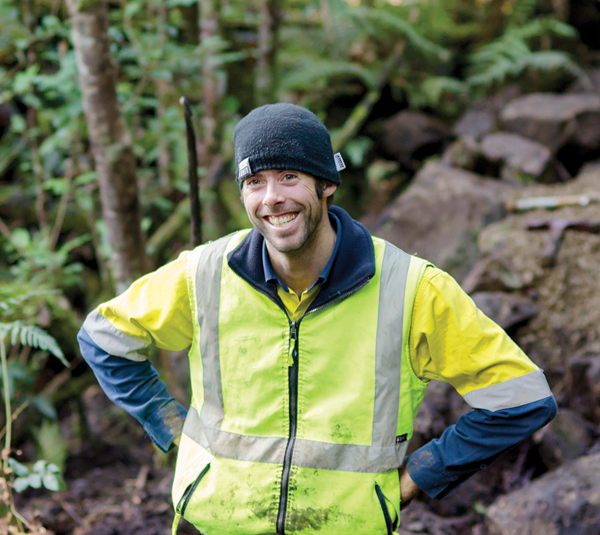 As they say in the late-night infomercials, “But wait, there’s more!”

The Tasmanian Mountain Bike Plan is a well-researched government document that sets out future goals with a view towards expanding the riding opportunities within the Apple Isle.

Objectives include, “Providing a world-class, diverse range of outstanding mountain bike riding experiences showcasing Tasmania’s natural environment to entice local, national and international riders, where the network of trails and facilities are managed on a sustainable basis with the support of land managers and riders.”

Say no more, this has been achieved with the North South Track.

However, there are a number of other exciting projects in the pipeline. Areas of development around Hobart include Wellington Park, South Hobart, Ridgeway, Queens Domain, Clarence, South Arm, Meehan Ranges, Kingston, Conningham, Snug Tiers and Glenorchy.

Some of these proposals include:

- The building of singletrack along the side of the Main Fire Trail in order to join up the network of trails on the side of Mount Wellington.

- Construction of a downhill track from the Chalet to Junction Cabin.

- Permitting mountain bikes on the existing tracks around Waterworks Reserve and Ridgeway, including the descending trail from Tolmans Hill.

Check out all the details for yourself if your’re keen, it’s all laid out in the Greater Hobart Mountain Bike Master Plan: www.wellingtonpark.org.au/assets/greaterhobartmtb_masterplan_text.pdf

Whilst these other initiatives are a work in progress, there’s every reason to believe that we’ll see even more great riding opportunities develop in and around Hobart. In the meantime, locals and visitors can be assured of an exciting few hours along one of the most fantastic and well-built trails in Australia, the North South Track. There’s certainly an abundance of enthusiasm, ideas and proposals for future mountain bike developments within the Hobart area, so stay tuned.