Race Face is not new to the carbon fibre crank game but for 2014 they’ve completely redesigned the top-end Next SL crank and introduced some really interesting features.

While Race Face contracts out the manufacture of their carbon handlebars and seatposts, the Next cranks are made in their Vancouver based facility. As with previous generations, the Next SL uses hollow carbon fibre arms with no alloy inner spine. This construction method mightn’t be new to Race Face but the rest of the system is. Previously the Next cranks used a 24mm steel or titanium spindle – the same diameter used by Shimano – but now they use a fatter 30mm spindle. Bumping up the diameter allows them to use an aluminium spindle, which Race Face claims to be stiffer than the previous steel spindle yet lighter than the titanium version.

BB30 and PF30 cranks also use a big 30mm spindle but they only work on some bikes. In this case, Race Face has created a range of special bottom brackets that let you fit their slightly wider 30mm spindle into just about any existing frame standard; traditional 73mm threaded, press-fit BB92, PF30, BB30, BB386 and Specialized OSBB. Race Face isn’t the first brand to shoehorn a 30mm spindle into a smaller threaded or press-fit 92 frame (e-Thirteen, Rotor and FSA have done similar things) but it’s a clever idea nonetheless.

The other clever aspect of the new Next cranks is the interchangeable spider and spindle; they call it the Cinch system. Again this is not a new concept but the execution is very tidy. Race Face offers spiders to suit the most common systems; 104/64 (triple ring or double with bash guard) and 80/120 (SRAM 2X10). If you’re running a one-by drivechain, Race Face makes direct mount chainrings with a narrow/wide tooth profile; these eliminate the spider completely and make for a lighter, cleaner looking set-up. The modular design even extends to the spindle; while the stock length works with most regular bikes, they also offer a wider spindle for fatbike applications.

Next SL cranks have always been amongst the lightest cranks on the market and that remains the case. The entire system weighed in at 525g including a regular threaded bottom bracket and a 32-tooth direct mount single ring. That’s 130g lighter than the equivalent SRAM XX1 crank and approximately 180g lighter than the current model Shimano XTR cranks when fitted with an aftermarket single ring. Next SL cranks are light enough to compete with exotic creations such as the German made THM Clavicula (how close it comes will depend on the chainring configuration). Let’s just say that weight weenies will be well impressed with the Next SL cranks.

Pricing will vary depending on your spider and bottom bracket selection but a setup such as ours would go for around $760. That’s approximately double the price of XX1 cranks but still cheaper than XTR.

Fitting the cranks was easy and the bearing preload can be adjusted via a locking collar—much better than the earlier Next cranks where you had to swap out different thickness spacers to adjust the bearings. While some people can fit a single chainring size and be content, I like to swap my chainring size to suit the trails and terrain. Around home it’s a 30 or 32 to get up the hills but I’ll fit a 34 or 36 for a gravity enduro event or a 28 if I’m heading for really big mountains. Initially I thought the spiderless direct mount design would make chainring swaps slow and tedious but I was wrong. The right hand crank self-extracts with an 8mm allen key and the Cinch lockring undoes with a bottom bracket spline tool. With these items on hand, a straight chainring swap takes two or three minutes. This is equal to or faster than swapping rings on XX1 cranks; there are fewer bolts to deal with and the Cinch lockring is fast and easy to undo.

I also suspected that frequent removal (to swap chainrings) could wear the cranks out prematurely but the large spline mounts and removes very easily. It seems to gain security from being large with plenty of surface area rather than requiring a super-tight press-fit. Despite numerous chainring swaps, I didn’t notice any change in the crank-to-spindle interface and they never loosened after riding

Race Face claims their cranks are very stiff and they certainly felt solid to me. Then again, most modern cranks have ample stiffness and I’ve never noticed any flex in any of the current offerings from SRAM or Shimano. While these cranks are about as light as they come, they are suitable for virtually any application. They don’t sacrifice strength to achieve their low weight and Race Face lists them as being suitable for anything from XC through to gravity enduro. I had them mounted to my 160mm travel all-mountain bike and they were bashed on rocks, ridden off drops and treated like any other crankset. While they’ve copped their fair share of scuffs and scrapes, I’ve had no issues with their performance and reliability.

Running them with no guide on an XX1 drivechain, I did drop the chain a few times. At first I held concerns that the Race Face tooth profile wasn’t as effective as the SRAM version. This turned out to be a weak clutch in the derailleur and once it was fixed, the chain retention seemed to be on par with the SRAM product. The same should apply for the regular 104PCD Race Face narrow/wide chainrings, which allow you to convert most regular triple cranks to run guide-free with a single ring.

While there’s no shying away from the hefty price tag, this is an amazingly light crankset that’s tough enough to handle anything on the sensible side of downhill racing. As an added bonus, the modular design future-proofs them against any new ‘standards’ that the bike industry dreams up in the coming years. Let’s hope Race Face broadens the use of their Cinch system to include some of their more affordable alloy cranksets. 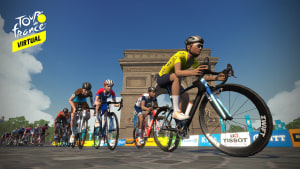 Zwift have opened the two new worlds of Paris and France to all users. 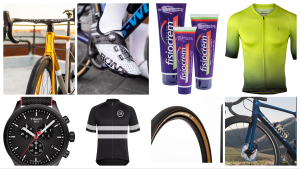 Top Gear: The Latest Hot Releases From The Cycling World

Cycling - it’s definitely an accessory sport! Here we take a look at the top products that have crossed the Bicycling Australia desk over the past few months. 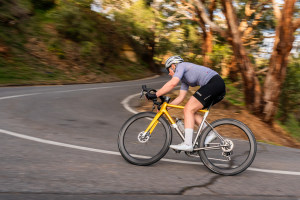