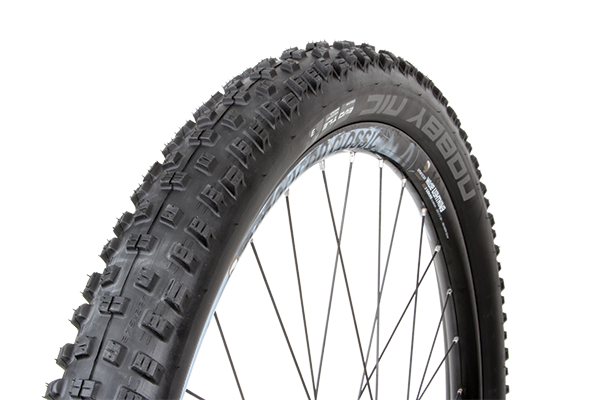 Despite its relatively low weight and fast rolling, high volume casing, Schwalbe’s Nobby Nic has been a bit of a polarising tyre in the past. Those who ride mostly softer and drier terrain have often sung its praises, whilst those in rocky, rooty or wet conditions have often complained about poor grip on wet surfaces or high lean angles. The tread blocks also tended to wear out so fast you could watch them disintegrate before your eyes, and that’s if they didn’t get torn off first.

Schwalbe have clearly been listening and have taken time to address these issues with the third generation Nobby Nic. Whilst the name may be the same, pretty much everything else about the tyre is completely new. Over the last few months we’ve been putting this new design to the test to see if it lives up to the promise of being the ultimate trail bike tyre.

The Nic is available in an almost bewildering array of sizes, compounds and casing constructions to suit just about anyone’s preferences. Our 27.5 x 2.25 Evolution casing tyres featured the new ‘Tubeless Easy’ construction and the grippy Trailstar compound.

We know that there are variances in manufacturing – especially in tyres – but someone at Schwalbe was smoking crack when they claimed this tyre weighed 610g; ours hit the scales at 750g. That weight is absolutely fine but putting them on your bike mightn’t deliver the weight reduction you expect. That said, the casing is true to size, measuring 58mm across the tread and 60mm across the carcass at 20psi on a 35mm internal width rim. Trim 2-3mm off the casing width if you’re using narrower rims, but either way it’s a generously proportioned piece of rubber.

Tread-wise the new design has little in common with the older Nobby Nic. Instead it looks like a trimmed down version of the Hans Dampf, although the Nic’s profile is quite round however as the tread doesn’t extend very far down the sidewalls. It presents a rather oddlooking silhouette on wide rims, with the tread perched precariously on top of the tyre, rather than wrapping around it. Initially this led to some concern as to whether the tyre would be able to hold an edge, but our doubts proved to be unfounded.

From centre to edge, the traction on offer was seamlessly consistent and its grip is much higher overall than on the outgoing Nobby Nic. It’ll hold any angle that a trail bike is likely to encounter, even when ridden aggressively. Rapid changes in direction are met with predictable traction without any dead spots or sketchiness. Once push beyond its cornering limits, the breakaway is reasonably rapid but the ensuing drift was controllable enough that it was still possible to pull things back into line. It doesn’t corner like a DH tyre but it has more than enough grip for its intended use.

Climbing and braking traction are likewise both commendable and consistent. Minimal ramping to the tread means that steep terrain, whether up or down, is met with an array of perpendicular edges that dig in and ensure that the decision to speed up or slow down is entirely up to the rider. It doesn’t seem to roll as fast as the older Nic, but it provides so much more useable grip that it just doesn’t matter. Across a wide variety of trail surfaces the new Nic impressed with its predictable grip, with the only exception being wet roots; whether it’s the rubber compound or the tread design (or both) it still isn’t the tyre you want if you’re heading to Vancouver’s North Shore or anywhere similar.

The new Tubeless Easy construction works well. All rim and tyre combinations are a little different but with a bit of fiddling we managed to mount them tubeless with a floor pump. Once seated they stayed put and held air as well as, or better than, any other tyre we’ve come across. The Snakeskin sidewalls are now reinforced with monofilament nylon rather than a multifilament (think fishing line versus sewing thread), which Schwalbe claims makes them tougher and more cut resistant. Ours have shrugged off countless rocks and sticks without missing a beat, so we’re inclined to agree.

As for overall durability, we’re very happy to say that, despite being the grippier but less durable Trailstar compound, our test tyres are wearing very well. Both front and rear show precious little deterioration through the harder centre tread, and whilst there’s a little feathering and rounding of the edge blocks, it’s about what we’d expect from most tyres—far better than previous versions of the Nobby Nic. This is very good news, because the greatly improved durability goes a long way to offsetting the comparatively high $95 asking price.

All up, we think the new Nobby Nic is everything its predecessors promised, but failed to deliver. It provides excellent and utterly predictable traction in almost all circumstances, rolls fast enough to not feel like a boat anchor, works reliably without tubes, and seems much more durable in both the tread and the casing. It perfectly splits the middle ground between Schwalbe’s heavier ‘enduro’ tyres and their fast/ light XC tyres.