When we were kids, most of us probably did some form of after-school or weekend sport. Whether it was cricket, soccer or netball, our parents would deposit us at a sporting field a couple of times a week, and we’d spend time – sometimes reluctantly – executing drills, running around ovals or simulating games.

Mountain biking is a bit different. There’s no Thursday training sessions, and only a few of us regularly race every week. What we usually end up doing is picking a start point, then riding to an end point. We may have done the same trail a lot, or we may have never ridden it before.

The difference between our young selves and our riding selves is the way we approach our sport. Running around the oval was boring, but necessary. Learning the offside trap or how to block a taller opponent under the ring might not be fun, but it helped us to play better games. In mountain biking, we can avoid the things we don’t like and focus on the stuff we do – but is that the right approach? 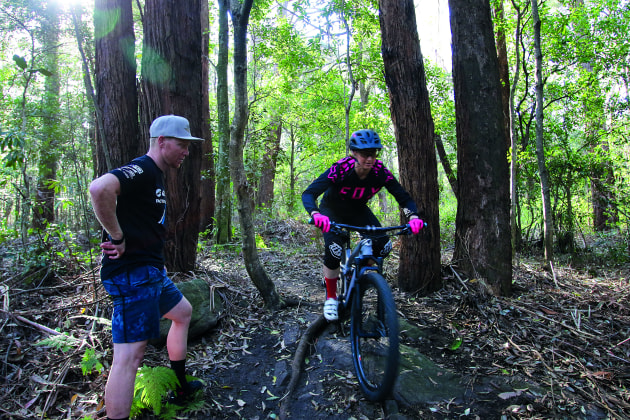 Enter the pro
EWS racer Josh Carlson is a great example of a rider who’s used drills and repetition to change the way he rides a mountain bike. As a former road rider and motocross racer, Josh – on a forced riding hiatus after badly dislocating his thumb – has worked hard to improve elements of his riding that don’t come naturally, so we thought we’d tap into that experience.

“When you're training, physically, you think about how much repetition you do with efforts,” says Josh. “If you're training to improve your cardiovascular ability, you're going to do five one-minute efforts. Then you do six, then you do seven, then you do eight, then you do nine; you're repeating things to make your engine better. Skills are exactly the same. Fitness makes it better, but your skill set is what makes you ride better.”

Our victi – err, student - Lisa Matuzelis is a perfect example of the point-to-point rider. Her skills on the whole are high level, but she’s aware of some weaknesses in her game… and it’s down to riding past things, rather than practicing them.
“I need to slow up,” she says. “You get used to riding fast on the trails and you forget stuff. Everyone wants to go fast and that's a trade-off of skill. Even though skill will make you go faster in the long run, I don't think we concentrate on fine-tuning our skills as much as we should.” 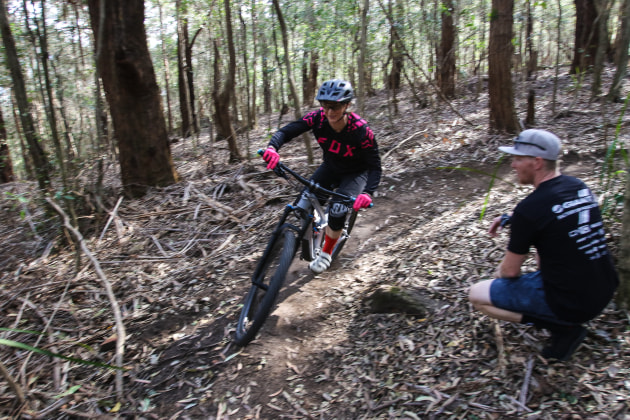 We find a small section of trail with a sequence of tight berms that Josh uses as a training area. “This is what I train on, these exact corners, like… hundreds of times,” he says. “I’ll come up here and hit this section 12 times. This is what I practice for my job.

“This is actually what I suck at. Being a pedaller and motocross guy makes me a nightmare on a mountain bike. You can pedal really hard and you’re not scared of going fast, but you can’t turn a corner, because you haven’t got a motor to get you out of trouble.”

Josh is able to refine Lisa’s action piece by piece, breaking up each part of the corner and offering constructive feedback.

Head down, bum up
Even after just a handful of runs, there’s a lightbulb moment for Lisa, as she and Josh talk through the process of cornering. “Really accentuate your hips moving,” says Josh.

“By swinging your weight through the back end, it’ll help you turn the bike a lot easier, instead of turning the bars, which throws your weight off.”

“So you’re moving your body weight at your hips to turn, instead of your handlebar?” says Lisa.

“Well, there you go. That’s what I’ve been doing wrong all these years!” laughs Lisa, who promptly pushes back up to do it again. 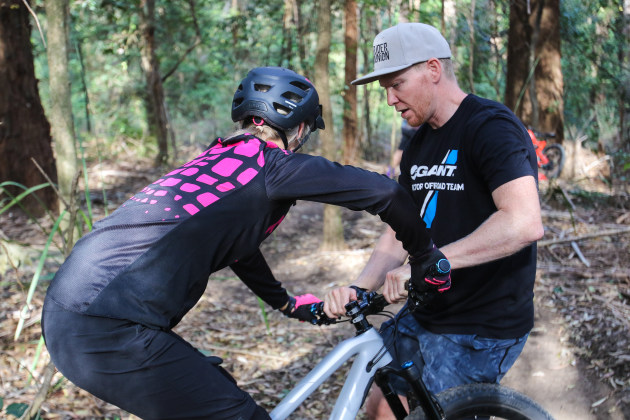 “When you’re doing this stuff, you can fall into old habits and just ride it. But if you stop and think about what your body is doing, it’ll help with the process. This time, think about your outside elbow, think about your bum, and go even slower again,” instructs Josh.

Even though we’re working with a section of trail no more than a hundred metres long, it’s crystal clear that repetition is an overlooked discipline in our game. Josh makes a good point about the way our bikes are changing, too.

“The way we corner can often come from cross country riding,” he says. “We’re not worrying about corner position, we’re just trying to save energy. On these bikes, getting the elbows up is much more important than position.”

After an hour, Lisa’s turning more easily and flowing out of the backside of the turn with more purpose and speed… and she’s convinced that setting some time aside to practice is a good thing.

“You get used to just riding,” agrees Josh. “You can’t say, either, when you’ve got a whole crew at 8am on a Saturday morning, ‘oh hang on, I gotta do this seven corners a hundred times'.”

“If you want to improve your riding, make it a point to nick off once a week, come somewhere like here and do this loop, these corners, over and over again. If you get real geeky, you can strap on a GoPro and you can watch exactly how you’re going.” 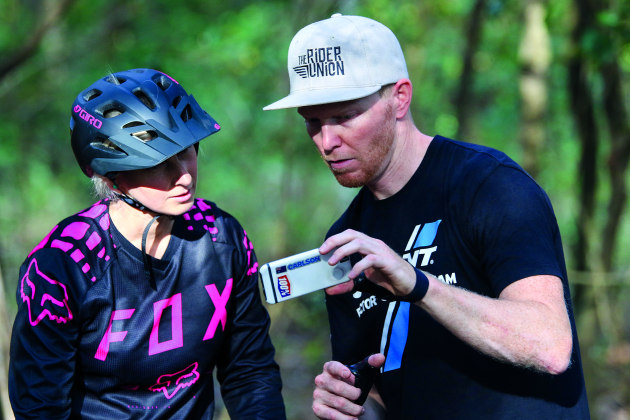 Free speed
Josh actually films Lisa as she progresses through the session, and the improvement is noticeable. and it’s a training tool we all carry with us.

“This is free speed,” says Josh. “You’re not doing anything different except for a basic skill. I’ve spent years and years figuring out how to go faster, and this is why Sam Hill beats us by so much, because of his corner entry speed. Sam brakes earlier and sets up wider; he won’t go through the turn twice as fast but he comes out of it twice as fast. And if he comes out of that corner half a second faster, then by the end of a small straight he’s got a bike length on me. Half the effort, twice the speed, double the fun.”

Josh then finds a long stick that he lowers over the trail to encourage Lisa to lower her stance even more. “It’s an old moto trick,” grins Josh. “When I used to race, if we weren’t close enough, we’d get whacked with it!”

By the end of the session, Lisa has definitely improved. “That was sweet!” says Josh. “I’m thinking more about it,” agrees Lisa. “My mind is definitely processing the turn more.

“I know I and the girls I ride with definitely session different areas on the trail. Probably not so much on berms and corners, which is probably where we should," says Lisa.

"Coming off a rock, you get that instant gratification; ‘oh, I made it’. Whereas a berm, you think, ‘oh, that's fine’. But, I think if you focused a little bit more on that skill, you would actually enjoy the ride and actually feel better on the trail, as well.”