Physiotherapist and cyclist Blair Martin looks at the common injuries that he sees in the mountain bikers that come through his clinic—are you one of them?

Let's start with an example:

Barry is a 42-year-old male cyclist, who presented to our clinic two days after a four-hour mountain bike ride. This was Barry’s first big ‘training’ ride for a 100km MTB race, in four weeks time.

His main complaint was lower back pain, starting approximately one hour into the ride, which worsened as he continued. He had pain when descending, riding on rocky ground in a seated position, as well as when he was climbing in the saddle. The pain was alleviated by standing up on the pedals and stretching his back, however it would return within three minutes of sitting down and applying load to the pedals again. When he stopped riding, the pain reduced, although it left him with a dull muscular ache.

He feels stiff when he gets out of bed or off his chair at work, though this eases the more he walks about. Hot showers also alleviate some of the stiffness.

Barry attended our clinic with his mountain bike, which was an alloy hardtail. He was running the stock saddle, which was rather narrow and had collapsed midway along the saddle nose.

Barry's case is typical of what we see in our clinic, The Body Mechanic, on a regular basis. Whilst Barry and his story is completely fictitious, he is the combined embodiment of thousands of riders I have seen over the past 15 years. The goals for clients like Barry are:

• With steady progress, work towards the point where he can complete theMTBmarathon without back pain bringing him to a grinding halt, and ideally beating all of his mates at work and last year’s time in the process.

In further discussion Barry explained that he cycled regularly, riding his road bike 10km each way to and from work two or three times per week, as well as a 70km road ride in a group over rolling terrain every second weekend. However he rarely rides his mountain bike, pulling it out for only two to three rides prior to a mountain bike marathon event, and he hasn’t done one for over six months. He works in a desk job, regularly sitting at his desk for more than 55 hours per week.

Barry is a former half-marathon runner who turned to cycling in his late 20s, having suffered too many injuries from his former sport. Barry admits to not stretching at all, unless he feels tight after a ride, claiming to be too busy with family and work commitments. He also does not do any core stability work. 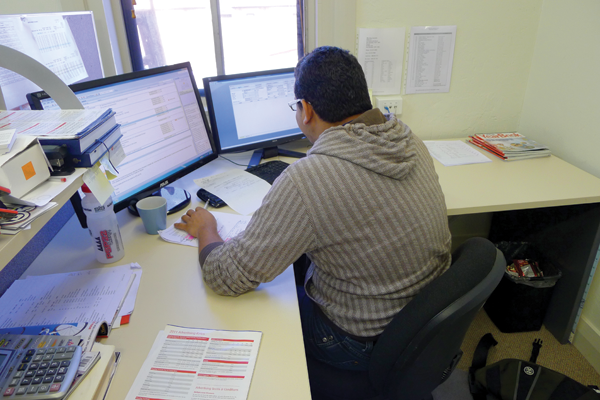 On assessment, Barry had tightness in his hamstring and gluteal muscles. Tightness in these muscles will result in an upright pelvis in the saddle, which places the lower back under stress as he reaches for the handlebars. His hip flexors were also very tight, and he found it difficult to stand on one foot without appearing unsteady around his pelvis. This means that he lacks a stable ‘base’ from which his leg muscles will be able to drive the pedals. Additionally, because of where the hip flexor muscles insert into the lumbar spine, his lower back also gets loaded, especially when he pulls up on the pedals. These physical traits are commonly seen in our clinic; they develop due to the demands of a modern-day desk job with prolonged periods of sitting, particularly where no strategies are employed to combat these issues.

Upon looking at his bike position, it was clear that he was riding with the saddle very low. On questioning, Barry explained that the low saddle affords better control when he is riding the local singletrack, with drop-offs and rock gardens. It also allows him to get his feet on the ground quickly to prevent falls with his limited ‘roadie’ bike handling skills. Unfortunately from a body perspective, riding with a low saddle places the hip muscles in a very inefficient range, with the front hip flexor muscles being very short, and the gluteals and hamstrings lengthened. As a consequence, when he puts effort into pedalling there’s a lot of leverage through the lower back. In addition, when riding over rough terrain, the flexed lower back will result in him using his lumbar spine as a suspension tool, requiring excess back muscle effort to absorb the vibrations and bumps.

It was also apparent that when seated, his weight was being borne by the pubic area and perineum rather than the ‘sit-bones’, due to the shape and tilt of the saddle. This forces a contraction of his pelvic floor muscles in an effort to provide a stable surface, and this effort detracts from his ability to stabilise the pelvis and lumbar spine.

So what is the main cause of Barry’s problems? Is it his poor bike position? Or is it his poor biomechanics due to work duties and no stretching or core exercises? Or is it that he has suddenly gone for a tough four-hour mountain bike ride – doing too much, too soon – after letting that bike gather dust for over six months?

To answer this clearly, it is important to know why we exercise and how the body is meant to operate under ‘ideal conditions’.

The intention of any exercise is to create adaptation in the body. The more the body adapts to the stresses that we place it under, the more stress it is able to withstand. Exercise actually damages the body, but in most cases it should only be on a microscopic scale. Every pedal stroke creates micro-tearing of muscle, micro-fracture of bone tissue, wearing of joint surfaces and so on. When you rest, those structures will repair. 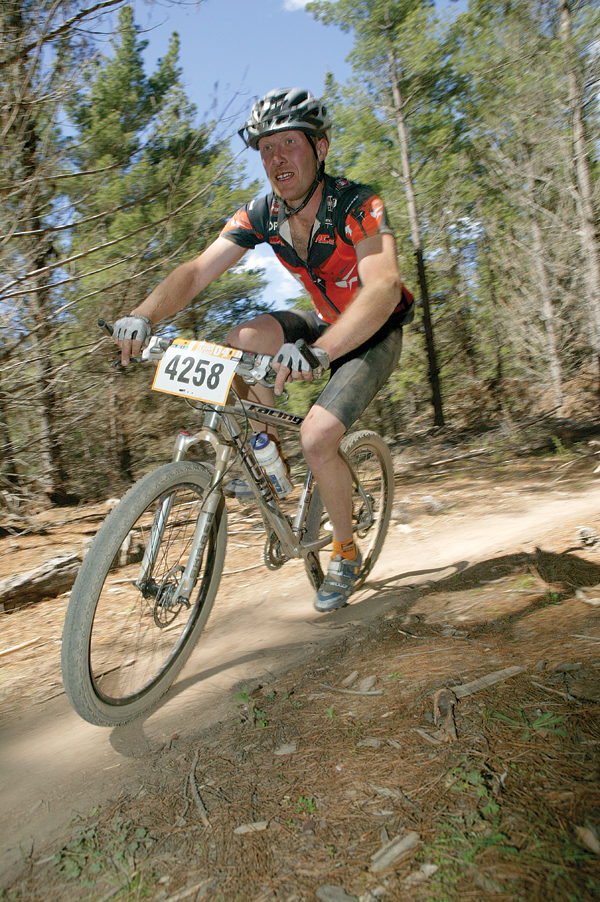 In ‘ideal’ conditions, this process should sit in equilibrium, with the repair in balance with the exercise you do. Or even better, the repair process will actually overwhelm the trauma and damage, which results in your muscles getting stronger, your bones stronger, and your joint surfaces more resilient. This is why we are told from a young age to do weight bearing exercise, as it is ‘good for your bones’.

Issues start to arise when the ‘trauma’ overwhelms the repair process. For an endurance athlete such as a mountain bike rider, this tends to be due to three significant contributing factors; biomechanical inefficiencies, external factors and exercise overload.

When combined, these stressors create too much trauma with not enough repair, and therefore no adaptation. As a consequence the body is unable to withstand the increasing load, resulting in too much tissue damage, pain and therefore decreased function—in short, you wind up with an injury.

So how does this relate to Barry, and have we gotten to the bottom of why he is getting back pain? Is it his biomechanics? Is it his bike fit? Or is it exercise overload? The answer of course is all three, and therefore we must attend to all three.

Here’s what we’d suggest to combat each issue:

• Biomechanics: Addressing Barry’s biomechanics requires some new ‘management strategies’ to start the long and gradual process towards improving his physical state. What would these strategies typically entail? Well obviously it varies on a case-by-case basis, but for a client such as Barry the first consideration is reversing the effects of his eight-hours-plus per day of sustained sitting. This would require the implementation of an at-work and end-of-day stretching program, though the fewer and easier the stretches, the better!

In addition, Barry requires the activation of his core and gluteal muscles when he is about to jump on the bike, therefore we’d give him some quick drills to complete before he sets off. Implementing strategies to improve flexibility and stability is like training for an endurance event—regular and successful completion of his newly introduced strategies will allow the best result at the end of the day.

• Bike-fit: Installation of a more supportive saddle and raising it to the appropriate height will reduce forces passing through Barry’s body when riding, however the bike still won’t pedal itself. Even with an ideal set-up, the demands of riding still place the body under stress, which requires gradual adaptation. A famous cyclist once said, ‘It never gets easier, you just go faster’. This definitely applies here as, once comfortable on the bike, you will only want to push yourself harder.

Additionally, Barry could consider the use of a height adjustable dropper post. This would allow him to run a biomechanically efficient saddle height when climbing or on non-technical terrain, then instantly lower the saddle for the technical stuff. Sure it'll add 300-400g to his hardtail but the confidence and efficiency boost is well worth it.

• Training: In order to adapt to load, your body needs to be gradually exposed to trauma, and recover from that damage. To ‘overload’ and then take days or weeks off the bike to rest is an ineffective training strategy.

As explained to our hypothetical Barry; it is the rider who has the least interrupted build up to the event who will be best prepared. Bearing in mind Barry’s time demands, he would be better served doing regular, shorter rides on the mountain bike (such as riding to and from work) over a number of weeks, while gradually increasing length and intensity of his weekend rides. The result would be a more sustainable and successful training load. This strategy would build confidence far better than having completed any one massive training ride, suffering from excessive pain and requiring additional recuperation time.

As you can see, an effective outcome requires more than just symptomatic relief at the clinic. Resolving ‘injuries’ or aches and pains is more than just tending to the part of the body suffering at the time, rather it is getting to the bottom of what the cause is, and addressing these issues. This gives the body the best possible chance of effectively adapting to the stress of exercise, and ultimately the best chances of achieving your exercise goals. If you can see a little bit of Barry in yourself, it’s well worth taking preventative steps before an injury cuts you down.


Blair Martin is a successful cyclist, runner, mountain biker and physiotherapist, and part of The Body Mechanic team. They specialise in cycling, running and triathlon related injury prevention and rehabilitation - www.thebodymechanic.com.au