It’s all downhill from here: Reflections on Thredbo

‘One rider in this room will go no further than Stage 1 of this six-day race. One rider. Will you be the one?’

I asked that question every year during the race briefing at dinner in Thredbo, the night before our Mountains To Beach stage race began. This event took riders on a wonderful 400km journey between the roof of Australia and the south coast surf at Narooma.

Stage 1 was short and steep; a descent from the top of the Kosciuszko Express chairlift to Thredbo village. Back then the only trail down the mountain was the Downhill Track. Each year we’d work with the mountain crew to create a route rideable by XC bikes. S-bends were mown into grassy ski slopes linking steep 4WD access trails and, indeed, sections of the downhill track itself.

I asked that question with an aim to keep a lid on adrenaline. Most years we ran the Mountains To Beach one rider indeed went no further. The most spectacular I think was he who, instead of turning into a corner, launched off it instead and ended up crashing onto the back of a parked ute. Unlucky yes but lucky it was the first aid vehicle.

Mid-November and there was plenty of first day anticipation in Thredbo. Queues were forming at the base of the chairlift for the opening of the 2019-20 MTB season. A 12 year old rider had been given the honour to breast the opening tape and load his bike on the first chair. I duly followed.

Sitting on the chair I could see my tubeless rear tyre deflating. I knew I should have fixed it the night before but frozen margheritas and a fine Mexican dinner seemed the priority then. 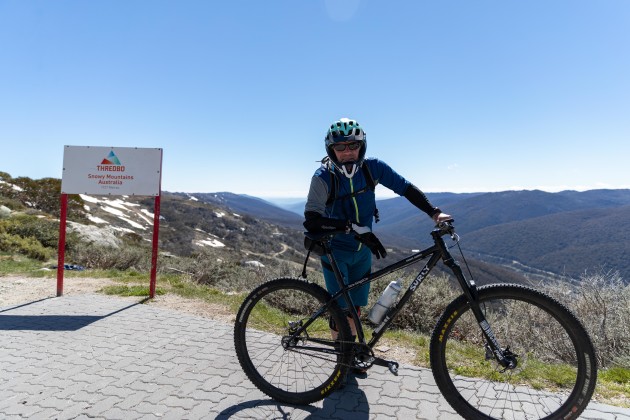 With the event proving you could get XC riders top to bottom in Thredbo, the resort commenced building first the Flow Trail, then the All Mountain Trail and, fresh for 2020, the Ricochet Trail. In parallel with this development a very special multi-use trail began its slow crawl down the Thredbo Valley.

At the first stakeholder meetings to discuss the Thredbo Valley Trail back in 2009, national parks outlined how they hoped it might ultimately run from Thredbo to Lake Jindabyne but that everything was dependant on funding. As the trail inched down the valley, we dreamed of a day when we might perhaps race from the top of Thredbo to Jindabyne.

A decade later, after many millions of dollars, much spent on a suite of six bridges to make any engineer proud, the TVT is now complete. 35km from Thredbo Village to Gadens Trout Hatchery. And the goodness doesn’t end there. A short hop from the Hatchery to Lake Jindabyne puts you onto the Hatchery Bay Trail snaking around the lake and on into Jindabyne.

I hatched my cunning plan in that Mexican restaurant. A plan to be the first to ride the trails in their entirety from the top of the chairlift to Jindabyne. Fittingly I was dining with legendary local trail builder Craig Stonestreet. Craig has been much involved in the building of the TVT and now heads up the trail team at Thredbo. But for me his legendary status came as much from his role as Supersweep for the Mountains To Beach. Anyone who can ride in slow motion for a week, offering encouragement and jelly snakes, deserves a medal or at least a margherita.

It was a cool 8 at the top of the chair. Walkers took off, headed to the summit of Kosciuszko, riders headed down. I pumped my tyre up and joined the lemmings. ‘One rider…….’ I remembered.

For some decades the tourism honchos in the Snowies encouraged visitors to bring their mountain bikes. There was a slight issue though; once they arrived ready to ride, there really wasn’t much by way of trails. At Thredbo the downhill course tempted the armour plated and a couple of kilometres around the golf course for the lycra. Near Jindabyne, some technical, rocky goat tracks above the dam. There were, of course, endless multi-day backcountry tours to be enjoyed but this required other skills and more time.

Build it and they will come so the saying goes and indeed they have and they do. In addition to the investment at Thredbo and the TVT, well-built trails run now from Jindabyne across the dam wall through to Tyrolean. Lake Crackenback Resort offers a network of trails, right at the halfway point of the TVT and the trail network at Bungarra outdoor centre can also be ridden at weekends and holidays. The TVT is soon to be extended to Dead Horse Gap, another 5km beyond Thredbo. 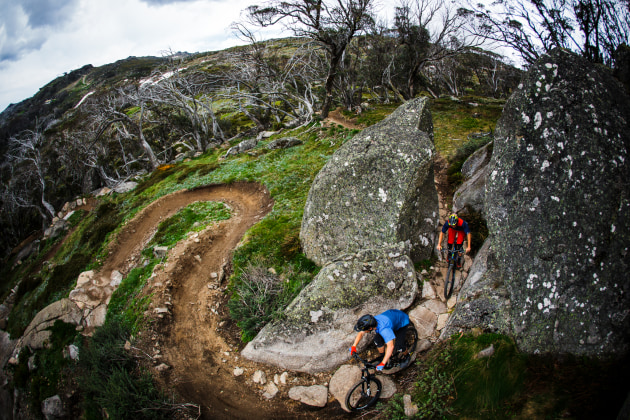 The 4.5km Flow Trail was fun as always, even on a hardtail singlespeed, dropping 600 metres from the top of the chair. ‘Hurry up old man’ said a jovial voice behind me who turned out to be a rider from the old Mountains To Beach days. The 10km All Mountain Trail was not fully open yet; deep snow still sitting on its upper berms and rock ramps.

Once at the bottom I blew a CO2 cartridge into my errant leak and, leaving the crowds behind, set off down the TVT. The Mountains to Beach usually featured a leek of another kind. Wales is probably the only country in the world to have both national flower, the daffodil and national vegetable, the leek. With the event taking place around St David’s Day, the national day of Wales, we’d locate a leek close to the trail. A major prize was awarded to the rider who found it and rode to the finish line brandishing said leek.

The TVT from Thredbo down to Bullocks is always fast and fun, offering relatively easy riding for the 18km or so. I passed a few riders in both directions and, whilst the trail is eminently rideable in both directions, I had more gravity on my side heading downriver. The trail is multi-use, so you always need to be aware of not just other riders but walkers and the occasional fisherfolk out to bag a trout or two in the crystal-clear Thredbo River.

Once at the Diggings campground, there are a couple of options. Take either the main TVT which in this section has a gravel surface, or the natural surface, slightly more technical riverside trail.

The Diggings to Bullocks section was the first part of the TVT to be completed. In the early days National Parks had the view that the trail should be gravel and indeed constructed this section in that manner. They believed it to be ‘safer’ when in fact such a trail has much greater slide potential to a natural surface trail. To their credit they finally listened to the MTB trail fairies and fortunately did not gravel further sections beyond this first one.

Lake Crackenback Resort is a very short diversion off the trail near Bullocks and diverted I did, to meet my wife for coffee and, of course, to do some tyre pumping. ‘Just put a tube in it’ said MTB race legend Andy Blair. Andy, twice on the podium at the Mountains To Beach, was hanging at Crackenback with wife and equal legend Jenny Blair and their kids. We reminisced about the event and the 250 riders and supporters crammed into the resort restaurant; still a record. I thought back to the final Mountains to Beach in 2012; the great flood. Somehow, during a week in which over 450mm of rain fell, we managed to get riders from the mountains to the beach. Those who took part will never forget it. 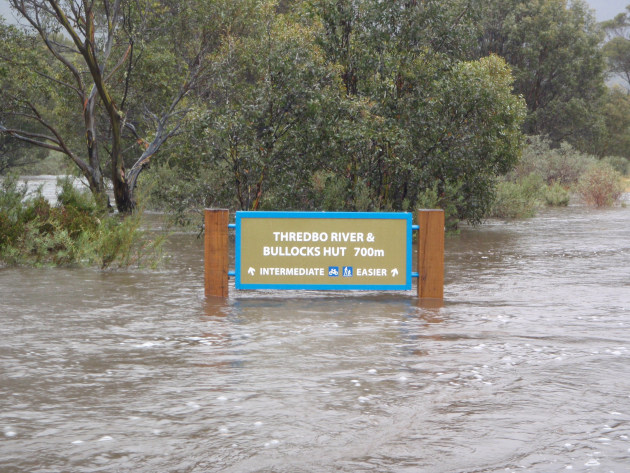 The 18km Lower TVT is intentionally very different in character to the first half. It steps up a grade, with more rocks and more ups; a solid blue grade. Whereas the upper trail has various bail out points en route, the Lower TVT takes you on a journey through rugged country on the northern side of the river. The only way out is go on or go back. With the final bridge, back across the river to Gadens, built in the winter of 2019, the full trail opened late October. Like lying in bed at night knowing eventually you’ve got to go for that leak (there’s that word again….) I’d gone only a few kilometres of putting off the inevitable with squidgy tyre before sticking that tube in.

Down close to the river and up above it. Down, up, down…. much fun, although legs and lungs were feeling the short climbs. Then across that last bridge to Gadens and the end of the TVT. You can fill up with water here and, if your hydration pack is big enough, pick up a smoked trout for dinner. The hatchery pushes out about 3 million fish eggs a year.

After so much singletrack, a couple of kilometres of blacktop comes as a bit of a surprise. This climbs away from the river into open country to cross directly down to the shores of Lake Jindabyne. Jindabyne, 10km away, tempts across the lake and an easy but very enjoyable singletrack takes you halfway there before picking up a bike path. Even this has plenty of dirt diversions.

50km of singletrack and 3km of not, I claimed my first descent beneath the statue of Paul Strzelecki, who claims the first non-indigenous ascent of Mount Kosciuszko and got to name the mountain too. If I wasn’t the first then surely I was the first rider from Wales in his fifties on a singlespeed?

The Mountains to Beach is no more. But who will run a race from the highest lifted point in Australia to Jindabyne? Which event director will issue the warning ‘One rider….’