The company of strangers

The Cloudride is a solo race, but joining forces with others along the way has its advantages. The high-country can be an intimidating place and having another rider with whom to share the journey can bring a lot of confidence. However, due to the demanding nature of the event and the vagaries of endurance riding, you may not have your new riding buddy for long.

On the second day, as I rode out from Tumut, I met Paul. With similar riding styles, fitness levels and a shared ride strategy, we were a good match. We would spend the next three days riding together.

After passing through the apple town of Batlow we headed for the very rustic McPhersons Alpine Plains Retreat near Nurenmerenmong. It was cold and it had been another long day so we were grateful for the basic shelter. Pork rolls were the only sustenance on offer. We ordered three each, two for now and one for breakfast. They did not sit well.

That night and the next day I had diarrhoea; not fun on a bike ride. And the terrain was getting mean. The riding into the Kosciuszko National Park and up to Australia’s highest town, Cabramurra, is tough and includes the first of many long hike-a-bike sections. I held it together until we had a good feed at the bistro. After that I couldn’t ride more than five-kilometres or so without a dash into the scrub — trees were getting harder to find. 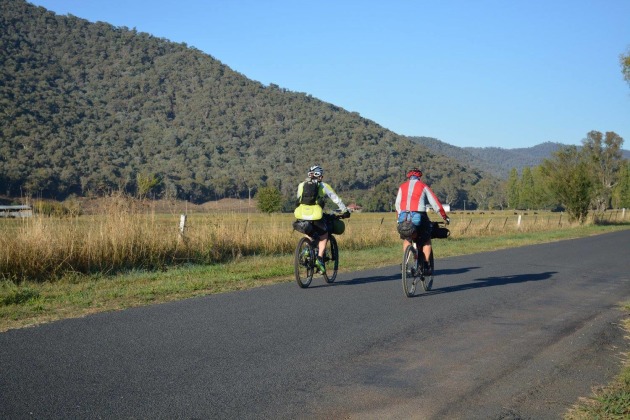 I had made an ambitions plan to ride 125-kilometres that day; we ended up doing 80. After dark, I realized that I was very cold, empty and utterly spent. Ten-kilometres out from Happy Jack’s alpine hut I told Paul that I was done. I couldn’t go on. After what seemed like an eternity, we found the turn and rode a couple of kilometres to the hut. We were lucky to find the hut already occupied and the fire blazing. Soon, a cup of hot tea was thrust into our cold hands. The next day, I felt a lot better. And it was a mere 80 kilometres to Jindabyne.

The stunning vistas of the NSW high country come at a price – the climbing is relentless. Other unexpected encounters kept our eyes from lingering too long on the horizon. The sight of a tiger snake rearing up, hissing, and preparing to strike is motivating. When Paul alerted me to this danger at my feet just after I had crossed a small stream, I was sufficiently motivated to leap, gazelle-style (but with less grace) back across the water. The snake, on the other hand, wasn’t going anywhere. Rocks and harsh language made little difference. A few minutes went by. There was no clear way around this guardian of the crossing, certainly not one that avoided scrambling through even better snake habitat. Luckily, the snake grew tired of our interference and moved away. We crossed gingerly and rode on.

Descending out of the big mountains proved as eventful as crossing them. Paul’s new brake pads dissolved under the pressure, which made for an unnerving and dangerous ride towards Jindabyne.

That evening we stayed at a ski lodge, stocked up on supplies and enjoyed some hearty pub grub. It’s rare when a massive chicken parmigiana, chips, soft drink and a slab of Mars Bar cheese-cake, isn’t an excessive amount of calories. 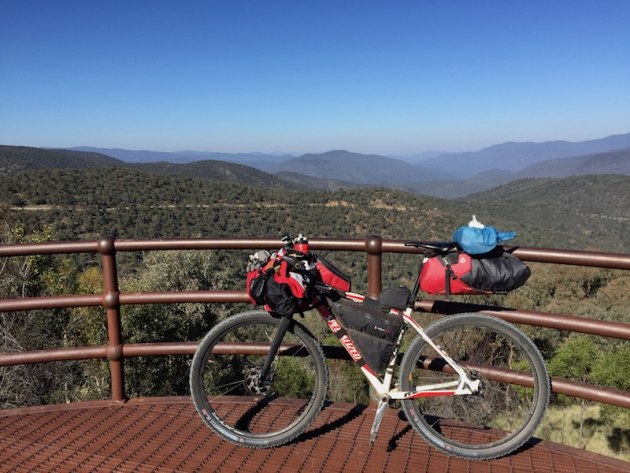 Here I go again on my own

Paul made the tough decision to stop his ride in Jindabyne. Heading down the Barry Way towards the Snowy River, I felt more vulnerable than at anytime on the journey so far. I felt bad for him. It takes courage to quit a big event, however compelling the reasons. More selfishly, I had also lost my riding partner on what I knew was going to be another epic day on the bike. Now, I only had the wildlife to complain to.

When the sun goes down the place really starts jumpin’. Wildlife is one of the obvious risks on the Cloudride: wombats, roos, brumbies and deer are common obstacles. A less obvious danger came from the livestock I met as I moved through various pockets of private property. I had a couple of very close encounters with agitated cattle, terrified at the strange illuminated figure on a bicycle. Occasionally I stopped, removed my helmet and had a chat to these creatures. More often than not, they soon realized that I was not an alien life form and relaxed enough for me to scoot by.

Endurance riding changes the shape of your body. Fifteen years of distance riding and my Achilles tendons have never protested. Not a murmur. Nothing. After five days on the Cloudride and I was in real trouble. On the sixth day, I pedalled along expecting to hear the awful sound of a snapping tendon. I made some adjustments to my seat height, but it was too little, too late. I essentially rode the last 400 kilometres dosed up on anti-inflammatories and with only one leg providing any real power on the climbs. When that leg got tired, I walked. 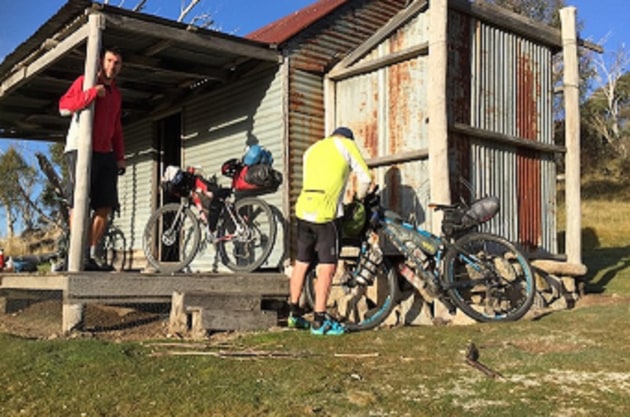 Mercifully the severity of the terrain started to ease. I enjoyed some relatively easy spinning on quiet back roads through Delegate and Bombala. A return to hike-a-bike came on the way to Nimmitabel, but the serenity of the Tantawangalo forest more than made up for the temporary hardship.

The final day came with mixed emotions. I rode in fading light through Kowen Forest on the outskirts of Canberra. I watched my last sunset knowing that a very demanding, intense and rewarding experience was coming to an end. Encountering car traffic came as a real shock to the senses. After nearly nine days, I had returning to real life.

Through a heavy veil of fatigue, I posed for a photograph in front of the leader board. I had a sore Achilles tendon, sore hands and sore backside. I had holes in my shoes from all the hike-a-biking. I had gorged on trucker-sized meals at every opportunity, yet I still finished three-kilograms lighter. But I was a Cloudrider.

Would I do it again? In a heartbeat. Invigorating. Exhausting. Thrilling. Brutally challenging. The Monaro Cloudride might just be the best ride I’ve done.

Daniel rides and writes out of Canberra. He is the author of Oppy: the life of Sir Hubert Opperman.