It’s the vastness that gets you. The azure blue sky stretches forever, touching down on the distant West McDonnell Ranges to the north. The innumerable dimples on the landscape, dotted with a surprising number of pandanus trees and foliage. And the silence. Other than the brisk rustle of a fresh breeze at my back, it’s serenely, strongly silent.

There’s also a feeling of power about the outback – even though I’m no more than 20km from the heart of Alice Springs, nature is definitely king here. As if to underline my thoughts, the wind drops and the winter sun’s rays instantly add a couple of degrees to the ambient temperature. This place has beauty and power in equal measure.

That’s one of the reasons why the Redback is such a terrific event. Now in its 11th year, the multi-day stage race is traditionally run at the tail end of winter; an enticing siren song to riders in Australia’s southern states. And, as you’ve just read, the trail network is truly impressive, and set to get better.

I’m not a stage racer – hell, I’m not even a racer – but the notion of a multi-day event that comes with a set of like-minded riding companions and a small army of people looking after logistics is a strong draw. The rider mix, too, covers the gamut of shaven-leg speedsters to… well, hacks like me. 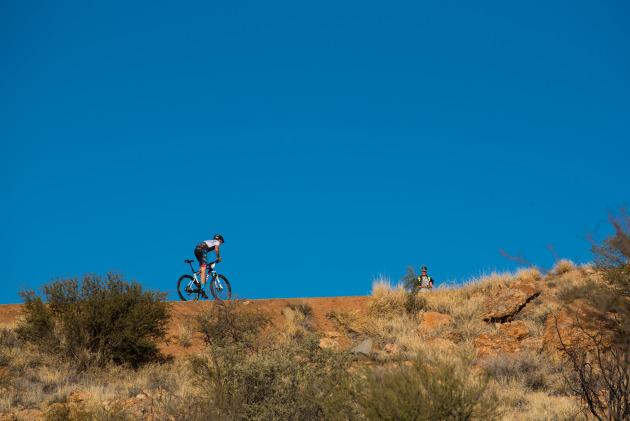 “It's always been like that, from the very first Redback that we ran 11 years ago,” says race director John Jacoby. “It's had the elite guys, and some really high level elite guys racing very much neck-and-neck at the front end, but the vast majority are average mountain bike riders, who are just out there to experience the trails and have a good time.”

I end up riding three and-a-bit of the event’s six stages, which in truth is a little less than I could have managed, if my mental game had been a little stronger. Even so, the finishing banner came down very shortly after I finished each of my stages…
Riders from all corners of the country have made the trek north, and many not for the first time. More than a few made the multi-day drive from other states, combining the Redback with a trip to other parts of the Northern Territory.

If you’re pushed for time, flying in with a bike – as I did – is pretty painless, too, while the fact that the entire event is based out of a single venue is also a boon. Of course, you don’t need to stay at the event hub – the Mercure, in this case – but with bike washing on hand thanks to the Krush crew, bike-friendly rooms and a buffet breakfast, it’s a pretty smart option.

Around 150 riders of all ages and both genders made the start line on day one, a 39km leg-stretcher that started from the event centre at the Mercure hotel.

“Stage one's always been tricky,” says John. “I've umm'd and ahh'd about whether we put stage one on the first day, because it probably is the toughest stage out of any of them in terms of technical skills and length of concentration that's required. It's probably 90 per cent single track.

“For a lot of people, it’s their first bit of riding they've done in Alice and they finish stage one and go ‘Holy shit, is it all like that?’ And I say, "Nah, it gets better!", and they're not quite sure how to take that comment. So, yeah maybe looking at tweaking stage one, could be a good thing.” 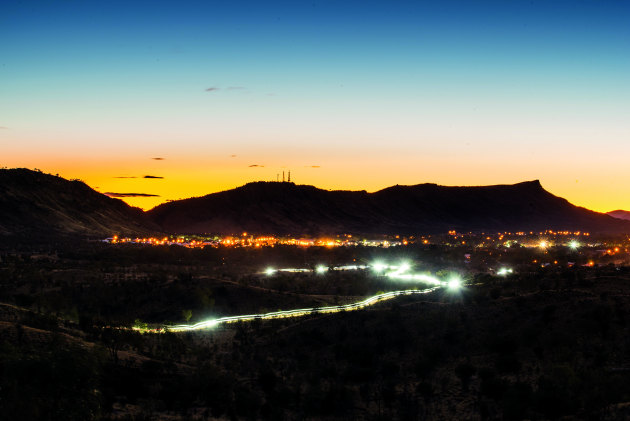 It’s certainly a tester. Don’t be fooled by the lack of elevation in the course maps, either – there’s enough pinch and roll to keep your quads awake, that’s for sure. The technicality of the course is interesting, too. I enjoy muscling up over short, sharp lumps and shimmying around obstacles, and there’s a lot of that to knock over, especially on the back half of the stage. Ribbon stone lines the way, too; it’s quartz-based, and flints sparkle like glass in the dusty topsoil. It’s sharp, too, and if you wander off line, you’ll scar – or even tear – a tyre sidewall in a heartbeat.

It’s enjoyable, though the back end is a challenge, and I’m happy to see the end… and so are the timing staff, who can finally go home! Our racing day is well and truly over by 2pm (much earlier if you’re not slow as lard), and it’s a pleasure to roll back to the hotel, shower and chillax for the afternoon. There is an odd little hillclimb up to the top of Anzac Hill in the centre of town later in the day, which helps set the order for the time trial the next day.

Day two is a double banger, with the aforementioned 22km time trial in the morning, which is repeated in the evening as a night stage. It’s a grand idea, not least because it gives riders a chance to preview what they’ll be tackling in the dark.

“It’s funny, but it was a lot less full-on at night than I thought it might have been,” remarked one rider afterwards. “Yeah,” comes the reply, “because you can’t see what you’re gonna hit.” 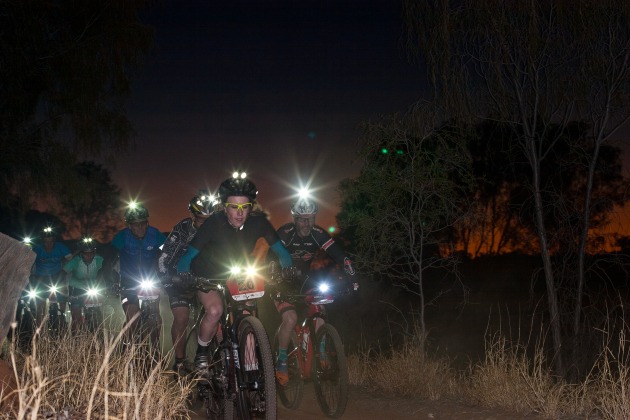 As the event rolls on, a rhythm develops, alliances and riding buddies are made, and the trails reveal themselves more and more. Alice Springs locals are in attendance, and are justifiably proud of what’s been achieved up here. There’s more coming, too, which interests John a lot.

“They're done a power of work just in the last 12 months on all the tracks on the west side, and there's probably an entire course that you could brew up there,” he reckons.

I park it for the 45km second last stage and as we cheer in the backmarkers, I start to see the strain on the faces of some of my new buddies. Doing 120km-plus of off-roading in three days isn’t easy… and we’ve got one more to go.

Sunday dawns cool and clear, and 45km of Alice Springs’ best trails beckon. It’s windy and steepish to start, which – along with a trailside assist – spits me off the back again, where I settle into my ‘one crank in front of the other’ routine. I’m not quite last, but I’m pretty close, and so when I come across a group of local lads offering free beer (check out my editorial for more), it’s too much to resist. And maybe I’d been out there a little too long by myself… anyway, it’s a mistake, as the diuretic effect of the alcohol plays havoc with my hydration levels, and I gently immolate like an old firework as the trails turn twisty and climby. I push on grimly, eventually crossing the line as – you guessed it – the crew are pulling down tents and everyone else has hit the showers.

That’s okay, though… I was only riding to kick my own arse, and I’d done okay. Not great, but okay. It’ll also be the last time I strap on a number plate, too, so it’s a slightly reflective Robbo who boards a Virgin bird back to the big smoke the next morning. 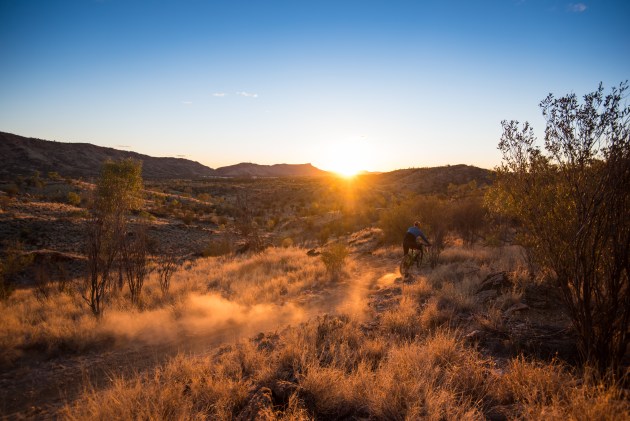 Alice Springs deserves a place on your mountain bike bucket list, and the Redback is a brilliant way to sample an amazing cross-section of what the Northern Territory has to offer.

The vibe of the race is so low key and friendly, the trails are absolutely worth the price of admission, and you get a chance to check out a part of Australia which is literally like no other. Wins all round!