Next day was a fun filled DH play day in the Rotorua Skyline Park. Home to the late Kelly McGarry designed Crankworx World Tour Slopestyle course. I knew McGazza personally, so it was special to stand on the massive features he created before his passing in 2016.

We took joy in burning up the best part of our 15 run passes on beautifully sculptured grade 3 berms in what was another stinking hot day.

That evening we were treated to an authentic Maori Hangi and cultural experience at the world renowned Mitai Maori Village Centre. It was a true cultural experience. In fact, I learnt more about Maori civilisation, Pakeha colonisation, natural flora and fauna in three hours than throughout my entire school education. The hangi was delicious, the dusk walk alongside an ancient freshwater spring fed creek was beautiful, and to come across a fully decked out Waka full of very intimidating warriors ready for battle was unbelievable. It was a look that could even challenge our own All Blacks. 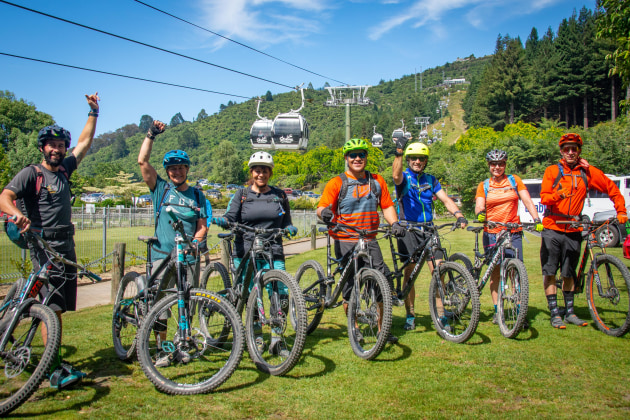 The next morning we headed south to Lake Taupo, taking in several tourist stops including the thundering white water of the Huka Falls as it smashes its way out of Lake Taupo. Later we stopped for a river swim in a pool where a natural hot spring river mixes with a cool river. You could choose your own water temperature by where the rivers mixed.

That evening Morgs put on a BBQ feast for us at the chilled-out Haka Lodge Taupo. We ate on an elevated deck watching the distant snow-capped summit of the volcano Mt Ruapehu turn pink across the expansive waters of Lake Taupo.

The next morning we headed out for some XC riding on the scenic and undulating terrain of the W2K and Headland Loop – part of the Great Lake Trail around Lake Taupō. Pedally it was quite XC but easy on fast, mostly smooth sandy yet really scenic.

A plunge into the warm crystal-clear water of Lake Taupo finished the ride beautifully. After lunch a scenic drive south along the shores of Lake Taupo, Australasia’s largest freshwater lake, to the cute little ski town of Ohakune. It snuggled in the shadows of the majestic 2,797m high volcano, Mt Ruapehu. For us it was the gateway to our next adventure in the Whanganui River area on the trail and the ‘Bridge to Nowhere’. 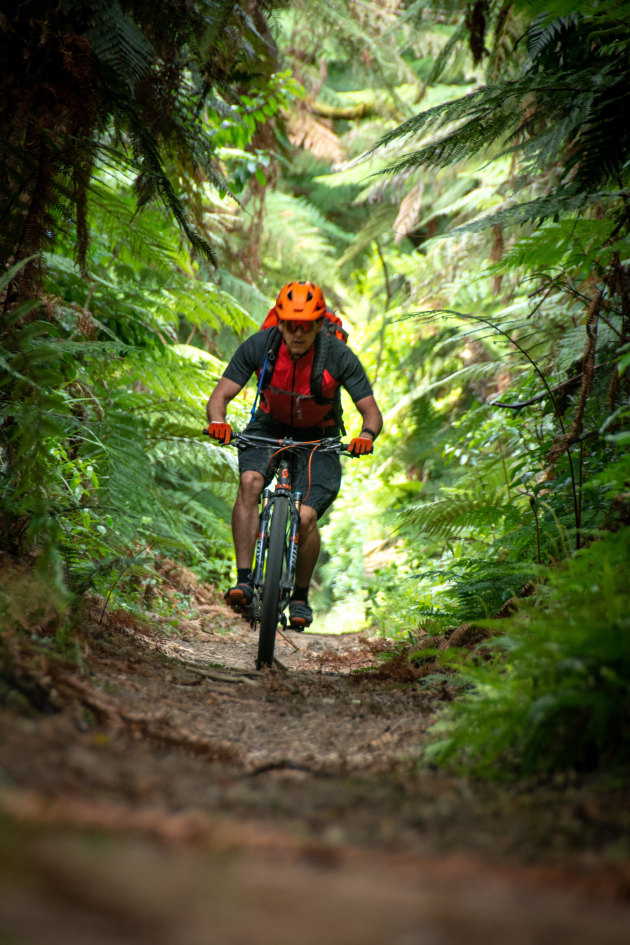 The charming Ohakune Hostel was a beautifully restored 100+ year old historic railway inn and was a perfect resting place before tomorrow’s big XC day of riding.

That night Morgs cooked an impressive banquette for us in the hostel kitchen and we ate like royals watching the sunset on
the active volcanic, Mt Ruapehu, from the dining room window.

Next morning a shuttle taxied us to the isolated ‘Mangapurua Track’ head via a scenic drive through steep rutted farmland
on amazing bendy roads into the headwaters of the  Whanganui River. The road had me thinking; “If this is the road, what’s the trail going to be like?” I would categorise the road, scenery and most of the backcountry Mangapurua Track as a ‘gravel bike rider’s dream trip’.

Leaving the shuttle we were straight into a pretty decent climb which blended into a 35 km XC type single track day through countryside formed by ash from nearby volcanoes. The area was gifted to returning WW1 veteran families to farm, all of which failed, leaving the area to regenerate back to its natural state.

Only names on gates signs remained as the volcanic ash terrain was completely unproductive for farming.

The ride culminated at the ‘Bridge to Nowhere’ another testament to the false optimism of that era. It is another crazy piece of our history, unused for its original intention of connecting the farming families with the outside world. The area earned the name of 'The Valley of Failing Dreams.' 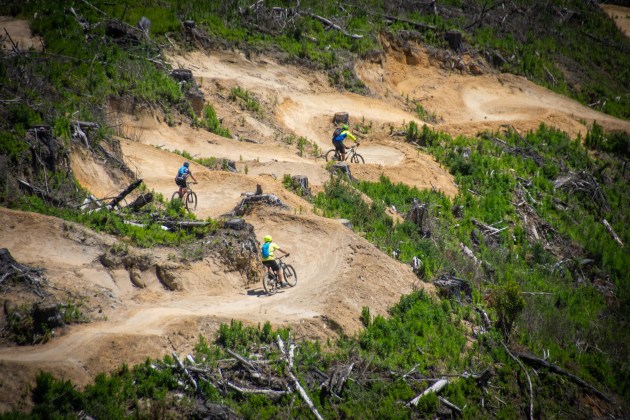 For us, this was our transition from bike to jet boat and an exhilarating blast down the spectacular Whanganui River. It’s mostly a flat-water trip passing under mossy cliffs, bush and waterfalls.

If I’m honest it was more economical than I thought. The added security of having professionals planning for the best bang for your buck works. No wasting time trolling the internet searching websites and reading reviews on everything you may want to do.

After my six days I could honestly reflect on the reality of travelling with a ‘light bike and a heavy credit card’ and the benefits of an occasional splurge.

A definite thumbs up from me.