‘Fun without limits’ – that’s Michelin’s marketing promise for its mountain bike tyre range. Since you’re reading this magazine, you would probably agree that that describes the sport generally. Grip, and finding its limits, are a huge part of the sport. And it’s your tyres that define just where grip starts and stops.

Enter Michelin’s Wild Enduro tyres, which sit at the most gravity-focused end of Michelin’s tyre range, aimed at providing the grip and durability that downhill and enduro riders need. These are the tyres that Australia’s own Sam Hill rode to his Enduro World Series 2018 Championship win, so clearly they can deliver at the highest levels of the sport.

The Wild Enduro is a 2.4” wide tyre, and available for both 27.5” and 29” wheel sizes (anyone still rocking 26” wheels will have to look elsewhere, I’m afraid). There are front and rear specific versions of each tyre too, but that’s where the configuration choices end. While this means that there isn’t a huge amount of choice within the Wild Enduro range to go for (different widths etc.), Michelin have paid very particular attention to the specifications of the tyres, with some key differences between the front and rear versions. 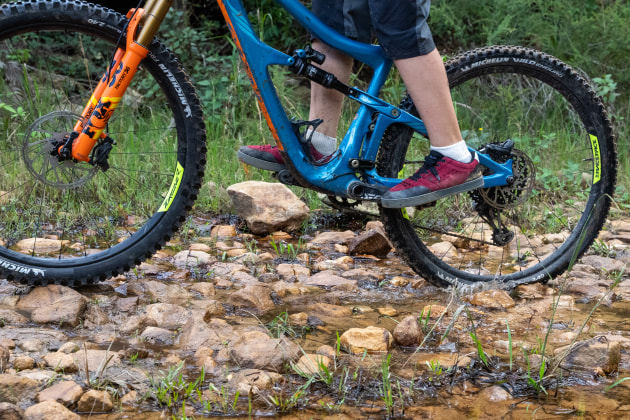 The front versions of the Wild Enduros have some of the biggest side-knobs I’ve seen on any tyre. They are seriously huge, looking like they’re just waiting to take a bite out of the trail. The centre knobs are also very prominent, albeit not quite as mega as the sides. The casing is 3 ply and 60tpi (threads per inch), which is what you’d expect for this class of tyre.

The rear versions are noticeably more restrained in the knob-size department. They’re still fairly aggressive in the tread pattern, of course, but the knobs are closer together and slightly smaller than the fronts in the interests of lower rolling resistance. Again they feature a 3 ply casing, but this time it’s at a low 33 tpi. This lower threads per inch count provides greater strength and puncture/tear resistance albeit at the expense of a little more weight. Rear tyres tend to get smashed into things much more than the fronts, and they take hits to the sidewalls more frequently. So it makes sense to give the rear tyres more strength by building them this way, but without adding the extra weight to the front tyres unnecessarily. This is one of those little details that shows how much thought has gone into the design and specification of these tyres.

As complementary tyres, the fronts and rears do share some key technologies, of course. Both feature Michelin’s sticky “Gum-X3D” rubber, which comprises three different rubber compounds: the softest on the side knobs, the hardest on the casings, with the centre knobs sitting somewhere in between. They also feature a Gravity Shield casing, which is the toughest tyre casing Michelin makes and which is designed to stand up to the abuse gravity racing dishes out.

The tyres are tubeless ready and mounted up tubeless fairly easily using a ‘booster’ style floor pump (one with an air chamber that allows you to preload and compress air to blow into the tyre). A proper air compressor would also work, of course, but given the fairly generous volume of the tyres, I’m not sure I would have got there with a regular floor pump.

Out of the box the front tyre weighed in exactly at Michelin’s claimed weight of 1030g, while the rear was actually a little lighter than the claimed 1160g, coming in at 1100g. Not light, obviously, but as solid gravity-focused tyres, still reasonable. 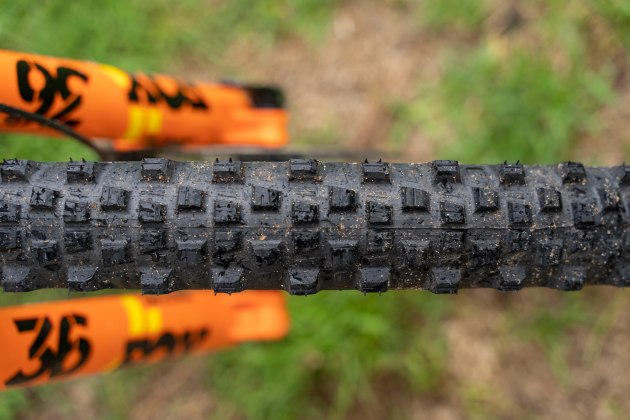 Mounted up on 30mm internal width rims, both the front and rear versions have a fairly square (rather than rounded) profile. With some tyres this can result in a fairly abrupt transition between grip and slip, but I didn’t have that experience with the Wild Enduros which performed consistently at different lean angles. I didn’t measure them with callipers, but they looked like a fairly true 2.4” across
the casing.

Michelin says these tyres are suitable for everything from hard/dry surfaces through to mixed/soft. Since my initial test period on these tyres has coincided with Sydney’s much-needed fire-quenching February rains, I haven’t yet had the chance to see how they perform in dry conditions, but I can tell you that they shed mud very well. There are also some mud-specific tyres in Michelin’s Enduro range, but given how well the Wild Enduros performed in the slop I encountered, I can’t imagine needing something even more mud-ready for local conditions.

So how do they ride? In a word, outstanding. Starting out at a fairly conservative 27psi front and 28psi rear (~95kg rider), I was impressed with both the grip and the rolling resistance. My test routes took in a combination of fire trail, slow technical sandstone sections and some smooth fast singletrack. As mentioned, everything was pretty wet and loose during the test period, but these tyres gave me confidence everywhere. They really do hook up well and consistently. Whether cranked over onto those mega side-knobs, or ridden less aggressively, the Wild Enduros grip tenaciously. When the grip does finally run out, the resulting slides aren’t too sudden and I managed
to gather things up again without mishap. 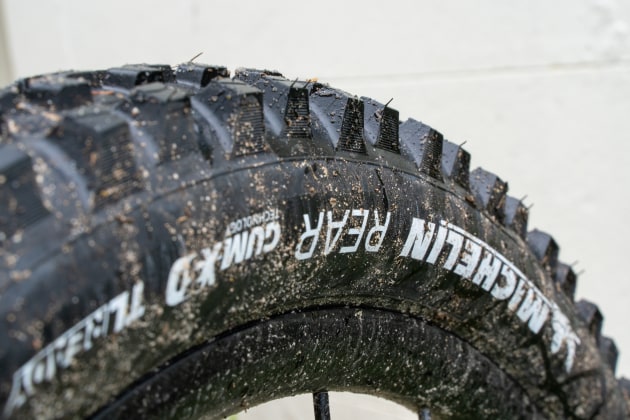 The excellent cornering grip is one thing, but what is really impressive is that it hasn’t been achieved at the expense of rolling resistance. Grippy tyres with solid casings can really feel like they’re adding a whole lot of drag to the ride. These don’t at all. Maybe the biggest compliment I can give them in this respect is that when hauling along flat or uphill firetrail, and even some tarmac, I just didn’t notice the tyres. It’s subjective, of course, and I can’t give you measurable comparisons with other tyres, but these certainly seemed like some of the faster rolling enduro tyres I’ve ridden.

Braking traction was also excellent. With its less prominent profile, the rear tyre doesn’t have the purchase that the front finds and can be locked up if you get too enthusiastic, but I quickly adjusted to using the grip it offers. If that’s the price for the lack of perceptible rolling resistance, then I think it’s well worth paying.

With the pressures dropped to around 20psi, the grip and traction were even better. I rode a particularly technical section of wet sandstone with them dropped down to that level. Descending was sure-footed and climbing was limited only by the strength I had left in my legs. There was some squirm from the tyres at these pressures, but even a few decent impacts didn’t result in the tyres burping or bottoming out on the rims. I’ll probably settle at around the 24psi mark for the ideal balance.

Bottom line? I couldn’t fault these tyres and really enjoyed riding them. With an RRP of about $120, they’re certainly priced at the premium end of the market, but for that they offer an unquestionably premium performance. From what I’ve seen so far, I’d happily run these for anything from all-around trail use through to enduro racing.