What the fork? The search for some non-tapered suspension.

Check out any road bike from 1950 and then one from 1985. That 1950 bike precedes the 1985 bike by the same time period as the 1985 bike does a showroom-new one, now in 2020. However, the two older bikes look identical to each other.  Steel frames, downtube gear shifting, etc. If you look closely, the 1985 bike probably has different brakes and a different spacing for the rear hub (6mm wider to accommodate extra gears). Basically, a long time went by with almost no change.

Since 1985 it has been all change, all the time. Frames changed to aluminium and then to carbon. Rear hub spacing increased twice more (up 4mm for yet more gears and then up 5mm for disc rotors). Some of the changes, like disc brakes, were borrowed from mountain bikes. But early on, everything mountain bike was borrowed from the road side.

The earliest mountain bikes were repurposed beach cruisers, fully-rigid flat-bar road bikes that usually had a coaster brake rear hub and less than optimal handling for speeding down dirt roads. One area that was sufficient for road bikes and early rigid mountain bikes (but would most definitely be inadequate now) is the steering arrangements at the front of the bike. The head tube on the frame, the headset and the steerer tube on the fork must all fit together to enable the bike to steer. 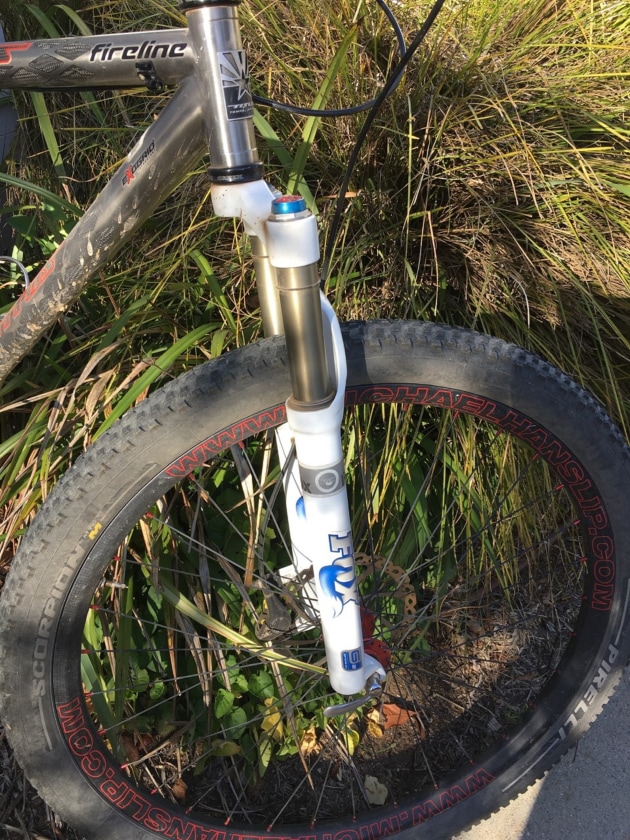 Old bikes have two important common traits. The 1” steerer tube that only really works in steel. And the threaded headsets that could work in any size, but only with a steel steerer tube (just picture cutting threads into a carbon steerer tube—better yet, don’t picture it as that’s a nightmare in the making). As I recall from working in a bike shop at the time, the driver behind all the changes was DiaCompe introducing the “Aheadset”—the first threadless headset. This revolutionised the installation of suspension forks, because they no longer required an appropriate length threaded steerer. Instead, one fork with a really long steerer kept in stock would fit any bike that came through the door—just trim to fit.

Yes, the 1 1/8” steerer tube had already been introduced prior to the headset, but once threadless was an option, it made everything easier, more reliable and safer (cutting threads into a steerer tube required expensive tools and a bit of expertise to do safely). No longer did the steerer have to be steel – aluminium was sufficiently strong if it didn’t have threads in it.

Incidentally, road bikes quickly took up this mountain bike innovation and it was an almost overnight swap from threaded to threadless for the entire bike industry.

Suspension forks didn’t change much in dimensions for many years. Changes in the industry towards stiffer bikes, particularly the development of oversized carbon mountain frames, meant that the 11/8” option was no longer enough. Some companies went to a 11/4” straight steerer, but the idea that stuck was a tapered steerer tube (11/8” at the top, 11/2” at the bottom – another idea quickly shared with road bikes).

Here was something that could even be made of carbon (the RockShox SID World Cup with carbon steerer/crown is a very cool looking fork, and light). As carbon frames grew in size to get stiffer, the large hole at the bottom of the head tube looked more aesthetically pleasing too. Today every proper mountain bike (except some with dual crown forks) uses a tapered steerer tube. 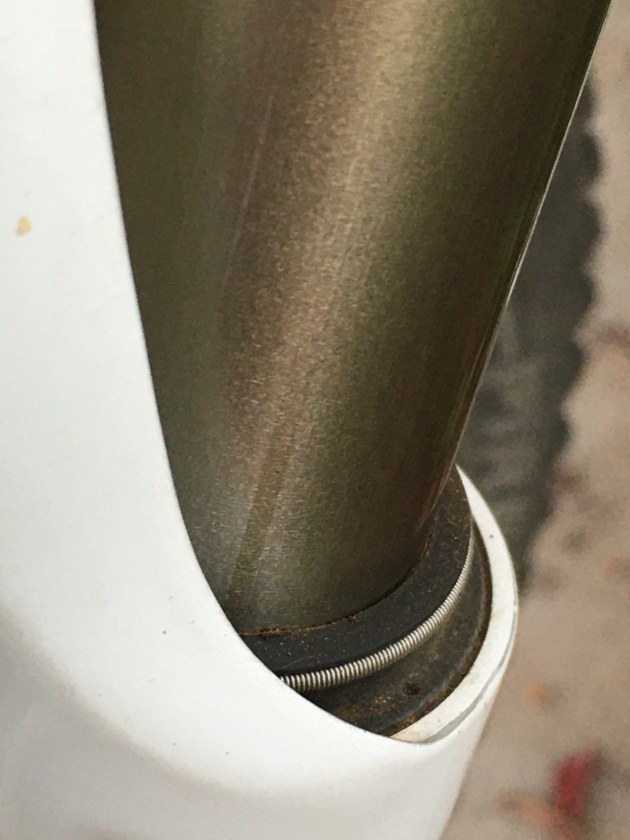 That’s fantastic if you are buying a new bike. It’s not so good if you have an older bike and need a new fork. There is no physical way to stuff a giant steerer tube into a skinny head tube. You have to run a 1 1/8” steerer.

Mountain biking is pretty new compared to most other sports (skiing, road cycling, tennis, golf—take your pick) and evolution is rapid in new activities. But hardtail race bikes in particular had evolved sufficiently by the mid-noughties that they are still relevant and entirely enjoyable today. I have a 12-year old custom-made hardtail that I ride more often than any of my other (newer) bikes. It has received replacement wheels, bar, seat, cranks and of course wear parts along the way, but the fork and headset are 12 years old too. The fork has had regular maintenance, but there is visible wear on the stanchions. Maybe if I had replaced the bushings a few years ago the stanchions would still be OK; I don’t know. I replaced the seals recently and noticed that the whole fork is just a bit loose, and the anodising is worn where the bushings rub. It needs replacing.

I competed in a race last year. In the pit next to mine was a dad, supporting his teenage daughter in this particular race. But we got talking about how he liked to enter the odd race himself. Not able to afford to buy everyone in the family a new bike regularly, his bike was of similar vintage to my own. He told me of the problems he had with keeping it going; unable to get all the parts he needs for the ancient bike. It was this conversation that got me started on this article.

Just last week I was browsing my Facebook feed. I noticed someone in a MTB group I belong to complained about not being able to get a non-tapered fork for his old bike that he desperately wanted to keep riding. There were at least 20 replies from other members about having the same problem.

I contacted four fork importers here in Australia. No one had a top-quality direct-replacement option to offer me (11/8” steerer, 29” wheels, 100mm travel, and quick-release). DIY MTB—X-Fusion agents—have a few each of the final production run of untapered 29er forks. The Slide at $620 and the Trace at $880 might be appropriate replacements to whatever you’re running now if you need a 29er fork. They are, however, both ‘through axle’ style and I’ll bet most of us with old bikes are running quick release, which probably means a new front wheel as most hubs cannot be converted. Eighty-One Spices—Formula agents—recently sold their last 11/8” steerer tube fork, a 26er, from stock and as Formula no longer produces them; that’s it. 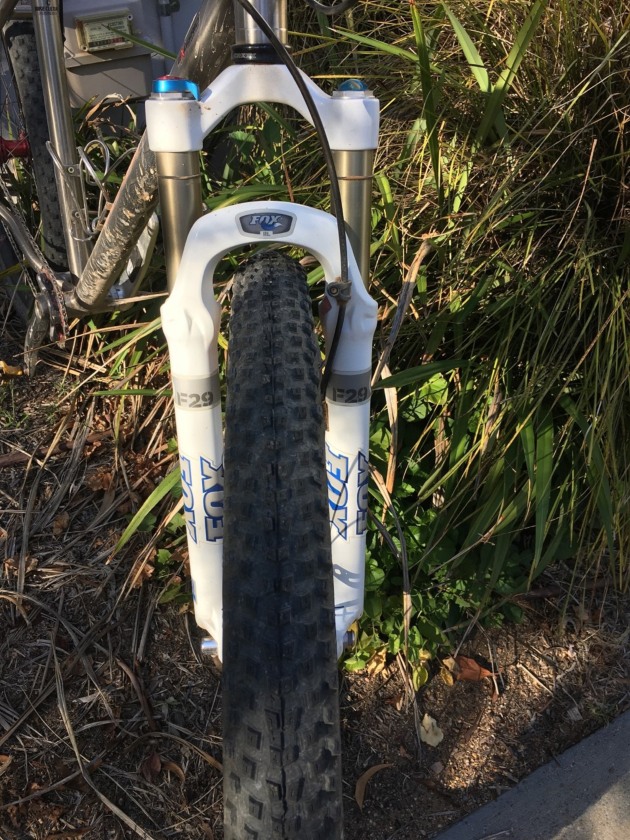 In theory both Fox and RockShox still support the 11/8” steerer size for 29ers. The Fox ‘fork builder’ page on their website gives one option if you select the steerer tube size first. These are well over $1000 dollars; enough money that many would think twice about the cost. RockShox is harder to delve into; but there is a Recon available with a straight steerer tube.

The one place I had a bit of a win was perhaps the least expected. I have used NS Dynamics (a suspension shop in Brisbane) to service my suspension when the official agent was busy. They bought all the spare parts from the old Fox agent when it changed hands. They told me that they have enough variety of parts that they can address most problems with old Fox forks to the point of being able to build a whole new fork from old stock. Prices were in the $300-$500 range depending on what was required. For RockShox they have to source parts from the importer. This means the prices are higher and the parts availability is lower. Replacing worn stanchions, for example, can be $600 for just the single part (called a CSU for Crown-Steerer Unit) making a full refurb a pricey proposition.

I understand why there are no forks for old bikes, but I don’t like it much. If I cannot resurrect my worn fork, I’m up for basically a whole new bike as the hubs aren’t ‘boost’ sized and won’t fit most new frames (I could write a whole other article on changing hub standards but old hubs are generally more available than old forks, they tend to wear better, and they don’t go out of production so completely—so it’s not quite the same thing). There are loads of websites dedicated to new-old-stock and lightly-used parts for vintage road bikes (for events like l’Eroica), but old mountain bikes are generally not curated with the same care as old road bikes. Perhaps that is because old road bikes are a pleasant ride not greatly different from a current bike whereas old full-suspension mountain bikes are wonky curiosities that most people avoid?