The Switchblade v2 was recently launched worldwide and incorporates a few new features to bring it into Pivot’s interpretation of All-Mountain. That’s a term that hasn’t been used that much nowadays in favour of Trail or Enduro, but with the excellent Pivot Firebird 29 taking the Enduro duties, the Switchblade stands in the range between their other offerings.

Under development for two years and now sporting a large upper rocker link atop a vertically mounted rear shock with an updated 142mm of rear travel (up from 135mm) and sticking with 160mm of front travel, the new model is unmistakably different to the old. With a few changes to the geometry: lengthening the top tube, increasing the reach and slackening the head angle the new bike doesn’t change the recipe that much, but where it does it’s for the better. 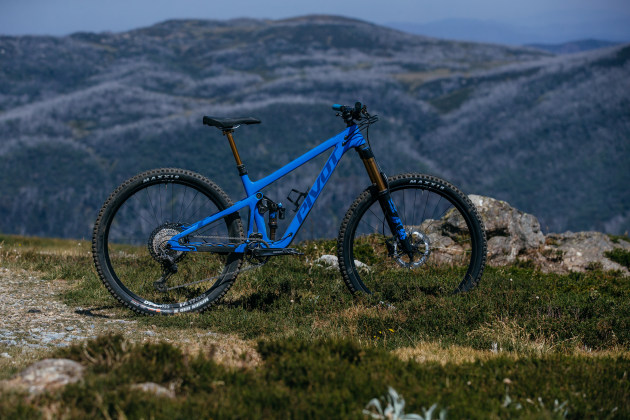 Reach numbers are up around 10-15mm over the old model – 460mm vs 470mm on a size L and available in sizes from XS right up to XL, for riders anywhere between 150cm and 200cm tall. Pivot have gone with an approach to the different size frames that sees the smaller bikes built with less material than the large bikes, keeping weight at a minimum level across the range but still with plenty of strength for the bike’s hard-hitting intentions. Still compatible with mixed wheel sizes of 27.5” / 29” or capable of running a mullet 29 front/27 rear or even reverse mullet, it will take up to 27.5x2.8 and 29x2.6 tyres with mud clearance.

I had the chance to test the new bike at a pre-launch event, riding the trails of the Victorian High Country: Bright and Falls Creek. The mix of steep, technical versus flow-trails of Bright and Falls were a good match for the handling proficiency of the bike along with plenty of chances to get airborne. I was impressed with the bike’s balance and suppleness of the rear, Pivot have worked with Fox and optimised the DW Link rear suspension to drop the compression tuning of the rear DPX shock quite heavily for plushness at the start of the travel, through a brand new base valve & selector plate design specific to this new model. The DW Link progressiveness has been bumped up so that even though the shock is supple it ramps up heavily towards the end of the stroke, also making it compatible with coil shocks.

While many brands are pushing very slack geometries in the name of flat out descent speed and comfort, Pivot have bucked the trend a little by opting for a 66-degree head angle, with the ability to steepen that to 66.5 degrees with a swap of a rear linkage-mounted flip-chip, which also changes the bottom bracket height between 346mm in the slacker setting and 352mm in the steeper. The reach number of 470mm on the large frame coupled with a 75.5 seat angle feels right in the middle of where most all-mountain/enduro 29ers are now. This strikes the balance between comfortable to ride for longer periods, with enough length to make descents comfortable and not feel like you’re going to get tipped over the bars in steep sections, but not so long that the front end wanders and lifts too much on ascending. I also rode the XL size frame for a day and at 6 foot tall myself with long arms, I also found this quite comfortable in its sizing. 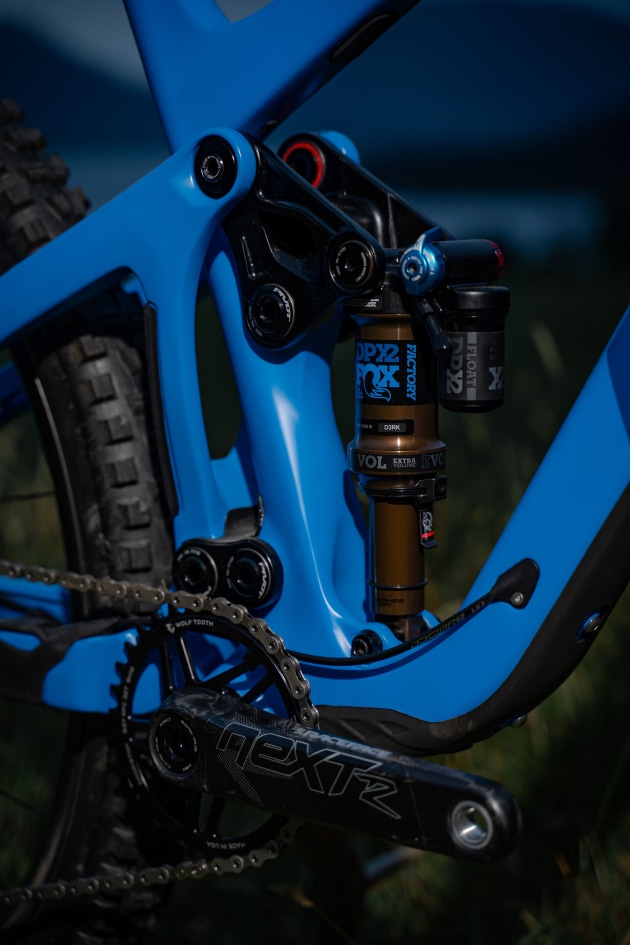 The seat tube is short enough that I could adjust the dropper post to still get out of the way enough for descending, and even though the 490mm reach looks absolutely massive on paper, I didn’t feel that it was too long to be usable. If you have a chance to demo one, try a size up as well before deciding exactly what size to purchase, especially if you’re between sizes on the sizing charts. Geometry can also be changed by swapping the lower headset cup to an external type to slacken the front even further, and thanks to this bike’s compatibility with 27.5+ wheels, you could run a 29/27.5 mixed-wheel ‘mullet’ option, or even a reverse mullet 27.5 front / 29 rear for those inclined.

Out on the trail it climbs great for a bike with its amount of travel, the DW-link efficiently stiffens up the rear of the bike even in the open shock damping mode. It has plenty of lateral stiffness, so it corners with precision and thanks to its 44mm offset forks and head angle, the bike has plenty of stability in the corners and when taking high-speed straight-line descents.  It doesn’t feel entirely like riding a 160/140mm travel bike, feeling more agile than the travel would suggest, but it’s nice to have that extra travel when you might need it considering how hard this bike wants you to push yourself. There were a few moments I was a little hesitant on: steep, rooty, rocky chutes, but just buckling myself in and keeping a little weight on the front for control worked well, this bike adds plenty of confidence! And coming back to the balance of the bike, when it’s not in these extreme situations, it handles itself well, I would not find a longer ride on this bike uncomfortable at all. 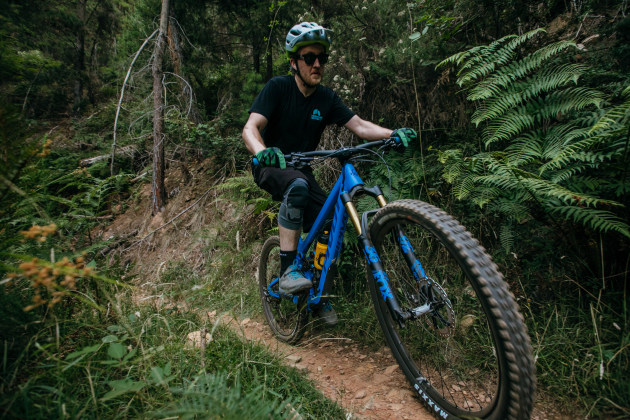 One thing of mention is the grips. Often a fairly overlooked component, as an example of Pivot’s attention to detail, they have specced a grip on this bike that took two years of development time. It’s left-right specific as it has a special taper to it, making it thicker closer to the centre of the bars and narrower at the ends, helping to give the damping feel of a thicker grip without it feeling too disconnected. The old “Padloc” system is gone, while this was somewhat useful for giving your hands a comfy resting point, I didn’t see the advantages of the system, especially considering that the bars had to be cut with a special angled pattern. Now that the new grip system is in play, the bars can be cut down to size with a normal straight cut. The grips work just fine either with gloves-on and gloves-off, and with a good balance between feedback and comfort.

Fox Live Valve is available on upper specification levels, which is a combination of a control unit with inbuilt accelerometers coupled to an electronic valve in the rear shock that stiffens the compression valve on demand when the control unit sends a signal to do so. The accelerometers can detect when the bike is in free fall, in which case it opens up the valve until the bike is detected to be hitting the ground when it then can activate the valve for a smooth landing, detect when the bike is being used to climb, stiffening up the rear suspension, and a number of other events it can react to. Unfortunately, a demo bike with this setup wasn’t available for testing, so we can’t really comment too much on its effectiveness, but Pivot tells me they are the world’s largest Fox Live Valve customer now, so many customers must have seen the benefit. I’m not sure what benefit that is over and above the already excellent suspension performance, though.

On the frame, water bottle clearance has been improved from the last bike, now able to fit a full-size bottle thanks to the rear shock orientation change, even in the XS model. The cable routing is tidy, with cables passing between the rear and front triangles over the top of the bottom bracket, out of harm’s way. There’s a spot on the lower top-tube for eventual tool mounting, or any other water-bottle-boss mounted setup. There’s a neat little drain port in the lower shock mount to drain rain or wash water away and a low-durometer shock-absorbing protector on the chainstay and lower downtube. Frames range from XS sizing for riders with a 152cm height right up to XL for 200cm+ heights. 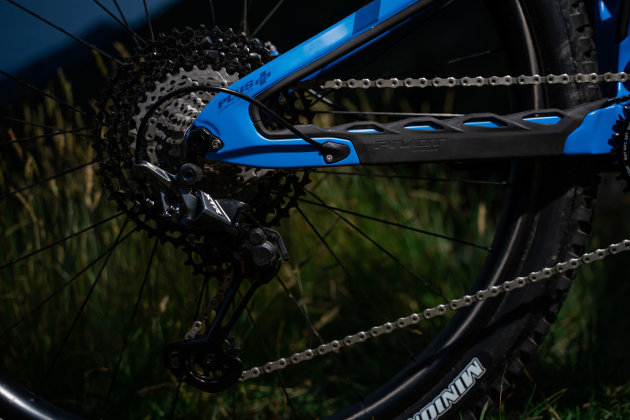 It was hard to fault anything on the bike, as from the engineering of the frame through to the execution of its on-trail experience was impeccable. The only major let-down is the pricing, the elephant in the room on this bike is the price of entry. That starts at $5,499 for a frame only option, $8999 for the cheapest build kit option through to a thoroughly eye-watering $19,999 for the XX1 AXS, Fox Live Valve, and Reynolds carbon wheel-equipped Race spec model. While buyers who can afford the price might wonder what they could have saved on by buying something cheaper, I doubt they will have much of a chance to worry when they’re aboard the bike and having a great time doing so. 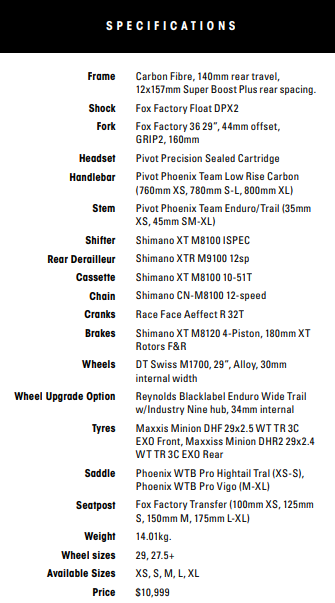