I’ve been racing bikes for a long while – since I was 14 years old (almost 40 years) – and racing MTB on and off for much of that period. But I’ve only had two dedicated XC ‘race’ bikes. The first a custom-made Ti hardtail (written about as part of my story about renewing old forks in MBA recently) and the second a full-suspension carbon bike I recently sold.

My needs are a bit different these days, with 24-hour races in my past and even club XC races getting more technical than they were 10 years ago, perhaps reflecting the changes at the World Cup level. Also, I do a lot more Enduro races, but around Canberra many I have done were ‘over biked’ with my actual Enduro bike and left me wanting something more than my old XC bike. 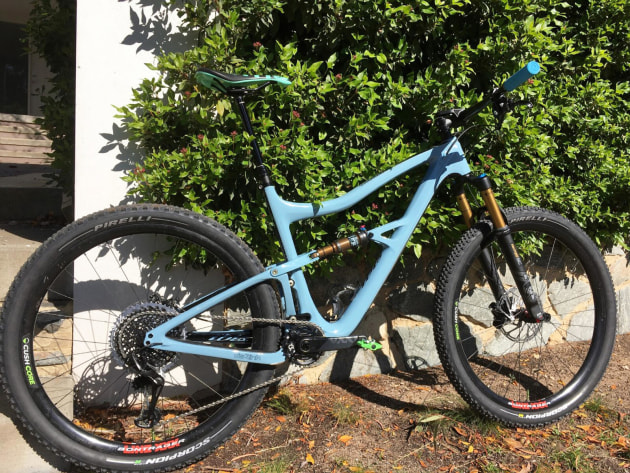 Enter the Ibis. One of the newest short travel bikes on the market that also subscribes to the long, low and slack school of thought. For a rider who is 193cm tall and has a 200+ cm wingspan, long is very welcome. The over-50cm reach of the XL Ripley is perfect for me.

I’ve never ridden an Ibis of any sort in my life. But I reviewed a Pivot bike with DW-Link for this magazine a couple of years ago and was pleased by just how good it was. I’ve never put much faith in single test rides anyway – test bikes are hard to come by in my size and unless the bike is a real dog, you can’t pick up on the bike’s traits without time to familiarise. Every review of the Ripley I read was positive – a number of them going so far as to say “I bought one”. You know this review is going to say that, because that’s the starting point of the review – how I got my new bike!

My Enduro bike is a couple of years old and has two parts that weren’t living up to expectations: the wheels and the brakes. When I built the bike I wanted to put Bouwmeester (from Adelaide) carbon rims on it, but they hadn’t yet gotten into 29” rim production (I did put a set on my partner’s bike in 650B size) – and he actually never did because Selle Royal hired him as their chief carbon engineer. Once over in the US, he licenced his own design to SRAM which resulted in the Zipp 3Zero Moto rims. I ordered the Ripley with those wheels, but meant for my Enduro bike. That left the wheels from that bike (Bontrager Line XXX) to hold up the Ripley. A task which I think they are perfectly suited to.

As to brakes, I had Guide Ultimate with 200mm rotors on the Enduro sled. They’re good, but on steep slopes in British Columbia, they weren’t enough brake. I ordered Code RSC for the big bike, leaving the Guides for the Ripley. And yes, strangely on a short-travel bike, I am running 200mm rotors on the Ripley. First, it ensures excellent braking at a slight (92g compared to two 180mm rotors) weight increase and second, it permits straight wheel swapping between the two bikes should I want faster tyres on the big bike or grippier tyres on the Ripley. 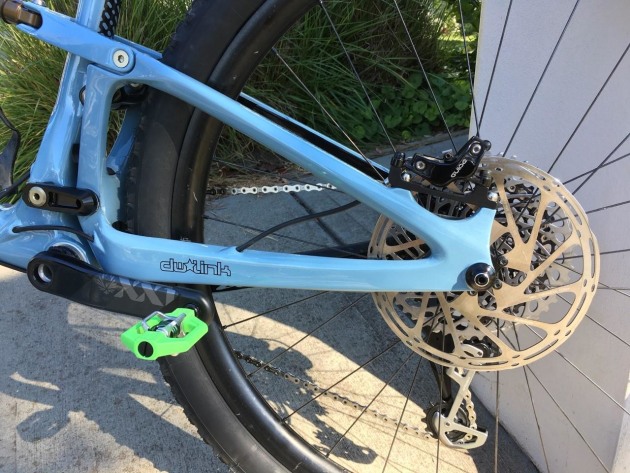 I chose the same XO1 Eagle drivetrain I was used to. It is excellent and I’ve found it very robust – the shifter doesn’t go out of adjustment and even with an old, worn shift cable the shifting remains perfect. Also, the 12-spd Eagle chain and cassette last a long time. It all just works. My one variation for the Ripley was to spec the Quarq DZero power meter cranks. I like training and racing with power and I wanted to try the Quarq meter.

I wanted to run an upper chain guide for that extra bit of security. SRAM one-by drivetrains are very reliable at retaining the chain, but I don’t ever want to lose a chain. I installed an ISCG-mounted top guide and the bolts touched the power meter (it’s quite thick). That’s why there is no guide in the photos. I’m waiting for my bike shop to find something that will fit.

Bars and stem are the same Bontrager Line Pro models as on my Enduro bike – the 82 cm wide bars are probably excessive for many; my long arms and long torso feel at home on them. For a dropper post I’ve come back to the Reverb – this time a C-revision with Vent Valve that will, hopefully, end my annual trip to the bike shop to have the post bled. I got a 200mm drop version, which is huge. It gets that seat so completely out of the way I don’t think there’s any need to go bigger (even the 175 drop post I’ve used before is improved upon by the 200 drop). 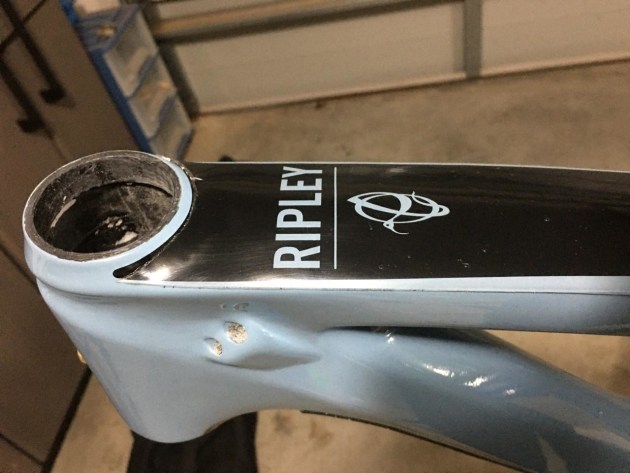 Since the water bottle sits below the shock on the Ripley, and because that portion of all Ripleys is identical (if it weren’t, the shock linkage would be different for each size) it means all Ripley frames require a side-loading cage. Not all side-loading cages are the same and the first one I put on was almost impossible to get the bottle in and out (which is why it was in my spares box – my partner didn’t like fighting her bottle at every drink). I ended up with the Bontrager Side Load cage – inexpensive but easy to use and it holds a bottle securely.

I’ve used Crank Brothers Candy pedals for about 15 years. In fact, I’ve had the same couple of pairs for that whole period. Last summer I experienced a snapped axle. Nothing lasts forever and it was well past time to update my pedals. The Candy 1 in the current line is closest to the ones I’ve been using for so long. Hence the pedals in the photos are an awful green – they only came in green or red and I thought green was better. Once installed I wasn’t so sure. The new ones are much easier to clip into and out of and feel more secure at the same time – yet another reason to not hang onto bike bits for too long.

I’ve been super impressed with Pirelli Scorpion tyres since I put a set on my hardtail 12 months ago. They provide the three traits everyone wants in a tyre: grip, speed and durability. A new pair (Mixed front and Rear-specific rear, both in 2.2”) along with the XC version of CushCore went onto my carbon rims. They suit the Ripley well with a good combo of speed and traction. I love the CushCore, permitting a big guy like me to run only 19 psi up front without the tyre moving around on the rim too much, or bottoming out on sharp edges but providing tons of grip and low rolling resistance. 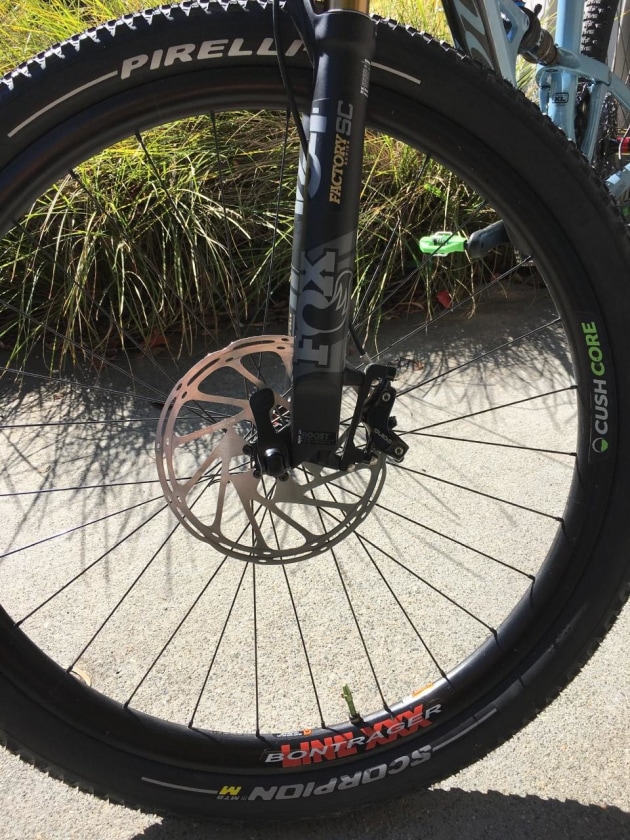 Ibis specs the Ripley with a 130mm fork in their own build kits but allows for a 120 or a 140mm fork as well. And after I read that they’d raised the Bottom Bracket 7mm (compared to Ripley Mark3) specifically for owners running 120mm forks, I figured that it was perfect for me. It steepens the angles slightly, but it should make the bike that little bit racier too.

Weight is always an interesting issue. For example, the CushCore adds about 300 grams of weight to the wheels, but it returns better traction, better ride and lower rolling resistance. That is a compromise I’m more than willing to make. The XTR-equipped Ibis build kit comes in at 11.7 kg in size Large. Some of my build is lighter, most is heavier; but I could only account for around one kilogram of the 1.7 kg difference. My old XC bike was a little lighter but didn’t feel so. I think the bike industry in general has gone away from ‘weight weenie-ism’ to accepting pragmatic weights. Lighter isn’t always better. My bike rides very light. I think that’s all that really matters.

The Ripley turned out to be everything I could have hoped for. It goes where you point it. It rewards different riding techniques with changes in attitude. It pops off of lips. The suspension is moving underneath you, but unless you look you can’t tell. It feels balanced front to rear. It has good traction on the way up, and good grip on the way down. My first shake-down ride turned into a three-hour epic. I just didn’t want to go home. 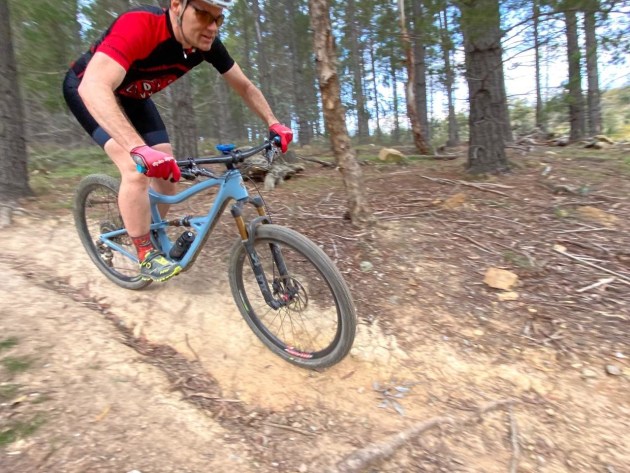 Given the current pandemic and its effect on racing, it will be some time before I get to strap on a number and see how the Ibis goes in competition. I think it might be slightly harder when tired because it seems to reward a very active riding style. On the other hand, the last ‘50’ I raced was on a single speed hardtail and everything hurt at the end of that from the firm ride and the one gear, so it’s bound to be an improvement in
that sense.

The bottom line for me is that every ride on the Ripley leaves me grinning like an idiot and wanting to keep going longer (and faster). I think I made an excellent choice. 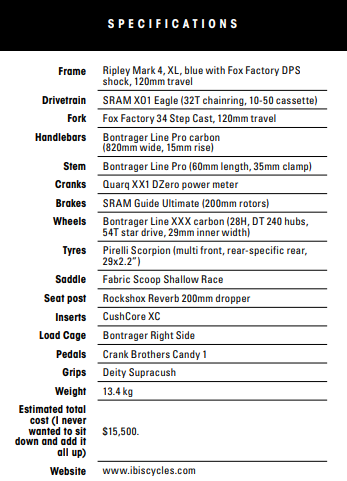