Earlier in the year I reviewed Michelin’s excellent Wild Enduro tyres, finding them to be truly outstanding all-round trail and enduro tyres. Michelin has now expanded its mountain bike tyre range, adding a family of more focused, downhill/gravity-specific tyres to the mix.

Designated as “DH” tyres and tested and developed with the help of Michelin’s roster of pro downhill and enduro racers during 2019, the new range adds four different tyre options for your descending pleasure.

Michelin calls the DH22 their most versatile downhill tyre. By this they mean that the DH22 is suitable for use on the greatest variety of surfaces, for everything from hard-packed/bike park terrain through to soft/loose trail and everything in between. The DH34 on the other hand is more focused only on hard-packed/bike park terrain, where Michelin says these will be their fastest tyres. The Michelin DH Mud tyres round out the Racing Line and have a much more open tread pattern which is designed, as you’d expect from the name, to shed mud.

All of the tyres are available for both 27.5” and 29” wheels, but in just a single width – 2.4”. While this obviously provides riders with fewer options, Michelin says that this is the optimal tyre width for the intended application of these tyres (presumably, they’re assuming most bikes in the category will be running 30-35mm inner width rims).

On test we have both the premium DH22 tyres and the DH34 Bike Park tyres. How did they perform and what did we think of them? First up are the DH22 tyres!

As a flagship tyre in Michelin’s range, the DH22 carries a recommended retail price of $119 per tyre. That’s up there at the top of the market, so what do you get for the money?

Gordon Murray, designer of World Championship winning Formula 1 cars and the McLaren F1 hypercar (amongst many others), describes Michelin as the “best technical tyre company on the planet”. Well, Michelin has thrown all of its bike tyre construction technology at the DH22. The DH22 offers Michelin’s top-tier Downhill Shield casing, which is a 4-ply, 55 threads per inch (tpi) casing, with high density puncture protection and reinforcement at the beading to allow lower air pressures. The tyres are tubeless ready, as you would expect.

The treads are very prominent, with oversized side-knobs and equally large centre knobs. The lugs are fairly well-spaced out, promising excellent mud-shedding (even though these aren’t the mud-specific tyres in the DH range), and clearly prioritising grip over rolling resistance.

Whilst only a 2.4” width – rather than the 2.5-2.6” tyres many riders now run on downhill and enduro bikes - these are nevertheless a chunky tyre, wide across the casing and with a fairly round profile. They don’t just look chunky either, as they weighed in at around 1500g each for the 29” versions we have on test. That’s a good 200g or so heavier than some of the popular competitive downhill tyres (eg a Minion or Assegai with a double down casing).

To the touch, the Magi-X DH rubber feels really sticky. Also immediately noticeable are just how stiff and inflexible the sidewalls of these tyres feel before you get them onto the wheel. Make no mistake, these things feel indestructible. That ultra-strong Downhill Shield casing is really apparent when you handle the tyres. The idea, of course, is to provide maximum strength and reliability to avoid a run-ending, and potentially race-losing, puncture on your way to the chequered flag.

It also makes for an interesting time setting up the tyres to begin with. Getting the tyres over the rim lips wasn’t too hard, but still required a fair degree of force. Where the stiffness of the sidewalls really came into play was in trying to seat the tyres tubeless. After a few goes with the trusty air charger floor pump, I managed to get the first tyre mounted on the rim. Promising. However, try as I might, I simply could not get the second tyre seated. The sidewalls are just so stiff that the air pressure from the charger simply wasn’t enough to push the beading of that particular tyre into the edges of the rims. After a number of attempts, interspersed with plenty of going around the tyre trying to massage the beads towards the edges of the rims, I wasn’t making any progress at all. Ultimately, it took a visit to a mate’s house to use his automotive air compressor (and both of us heaving on the tyre to get it into place) to get the second tyre seated.

Once seated, the tyres held air perfectly, losing no pressure at all over the couple of days between my installing them and taking them out for a first ride. Initially, I ran the tyres at 26psi (front) and 27psi (rear), dropping back to around 25psi front and back over the course of the next few rides.

So, to the riding. Our test terrain was a real mix of Sydney conditions, everything from mud and clay, through to wet and dry sandstone, deep loose gravel, wet roots and hard-packed berms. Across all of those conditions, these tyres have grip for days, truly delivering on Michelin’s promise of these being incredibly versatile tyres. Quite simply, the DH22s inspire huge confidence. The more you ask of them, the more grip they seem to be able to give.

Under cornering, the tyres are very consistent, with seemingly no transition from the centre to the sides as you crank the bike over. They just grip, and grip, and then grip some more. With sidewalls as stiff as these, I was expecting not to feel any squirming as the side loads increased, and that was exactly how they rode: a consistent hold on the ground, no matter what I threw at them.

One of the trails I ride regularly has a tricky, off-camber slab of sandstone in the middle of a steep rock garden. Although I’ve ridden it dozens of times, that slab is always a bit of a heart-in-mouth moment, with the question as to whether the front tyre is going to hold or instead serve me a rock sandwich. On the day that I rode there on this test, the slab happened to be wet too, but I was already so confident on the DH22s that the slab came and went with nothing but sure-footed speed from the tyres.

Braking traction is excellent, with the tyres biting hard into any surface, and allowing a lot of modulation and serious stopping power before threatening to lock up. Mud-shedding was also very good, with chunks of clay and mud getting thrown out of the tread (and up my back) very quickly after a muddy section.

My original plan had been to take these tyres to Ourimbah for a good shuttle session on the fabulous downhill/enduro trails to be found there, but unfortunately that didn’t work out during our test period. What that meant was that all of my riding on these tyres was self-powered: the ups as well as the downs. That really demonstrated the purpose-specific nature of these tyres: riding uphill or on flat terrain is just not what they are for. The rolling resistance is particularly noticeable at low speeds, where the combination of the super-sticky rubber, the aggressive tread pattern and the sheer weight of these tyres makes acceleration an energy-sapping business. Technical climbing was especially tiring. While there is all the traction you could possibly want, they demand huge effort to keep the tyres moving at low speeds over obstacles.

But if technical climbing is your thing, there are much better choices out there (Michelin’s own Wild Enduros, for example). Instead, like it says on the tin, the DH22 is a tyre for when gravity is providing the accelerative force. The steeper the better. These tyres allow you to go faster than you think is wise, because they just keep hanging on.

So if your riding involves chairlifts, shuttles or, perhaps, even e-MTBs, then no matter what the trail surface the DH22 is an excellent choice that will have you riding faster and more aggressively with more confidence.

The DH22s are some of the grippiest, least compromising, speed-focused tyres I’ve ever ridden. If you’re racing downhill, or just like going as fast and confidently as you possibly can with gravity behind you, the DH22s have the goods. 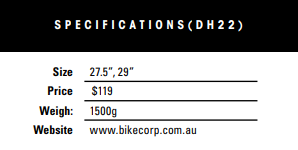