It’s been slightly more than 12 months since Norco shocked (excuse the pun) the MTB world with the release of its ultra-impressive Sight VLT 27.5 e-MTB.  The Canadian brand had taken its time before entering the powered bike market segment, and that wait (as we mentioned in the review of the VLT 1) was worth it for riders. In short, the VLT killed it; that bike’s adherence to the riding characteristics of its mechanical brethren was one of the many highlights (that also included its flickability, powerful 630Wh battery, and robust drivetrain and frame) of the bike.

Even then, there were whispers of not ‘if’ but ‘when’ a 29er version of the VLT would land but, again, Norco was in no rush – the Canucks have had a lot going on since late 2018, not the least of which was the development, then launch, of its Ride Aligned design system. This rider-focused bike setup system allows riders to tweak suspension settings, tyre pressures, sizing and geometry through an app, for a near full-custom bike setup aimed at ensuring optimum bike/rider performance on the trails. It works – as this VLT 29 proves.

As with its 27.5-inch wheel stablemate, the 29er Sight VLT offers 150mm of rear travel and 160mm of squish at the front end. It also adheres closely to its also all-new mechanical equivalent regarding its silhouette, with the stand-out beefier downtube (housing the battery) and bottom bracket area and (as with the 27.5) some subtle geometry differences compared to its mechanical variant. In terms of overall appearance, though, the Sight VLT 29 A2 still offers the excellent fit and finish that Norco is known for, and all covered in a stealth black paint job.

With a year in between model launches, it’s easy to see more than a few tweaks here and there in terms of the VLT 29’s design, with the incorporation of the Ride Aligned ethos the main one, along with the continued trend to Longer, Lower, Slacker, when it comes to design and geometry. And, for this latest Sight VLT, we should also add in ‘way more aggressive’ (more on that later).

The most notable difference between this new model and the 27.5 is the much steeper effective seat tube angle, and the notably slacker head tube angle, a reflection of the bike’s move into the more aggressive side of All-Mountain bike design. At 78.7 degrees for the Large tested here, the seat-tube is considerably more upright than the smaller-wheeled model’s 75-degree STA. The reasoning behind this is simple: with bigger wheels and a resulting longer wheelbase, as well as a notably slacker headtube angle (at 64 degrees, the head-tube angle on the VLT 29 is two degrees slacker than the 27.5), Norco has ensured that climbing performance on this big bopper is not adversely affected by keeping the rider well and truly centred over the cranks, helped even more by the long 458mm chainstays. 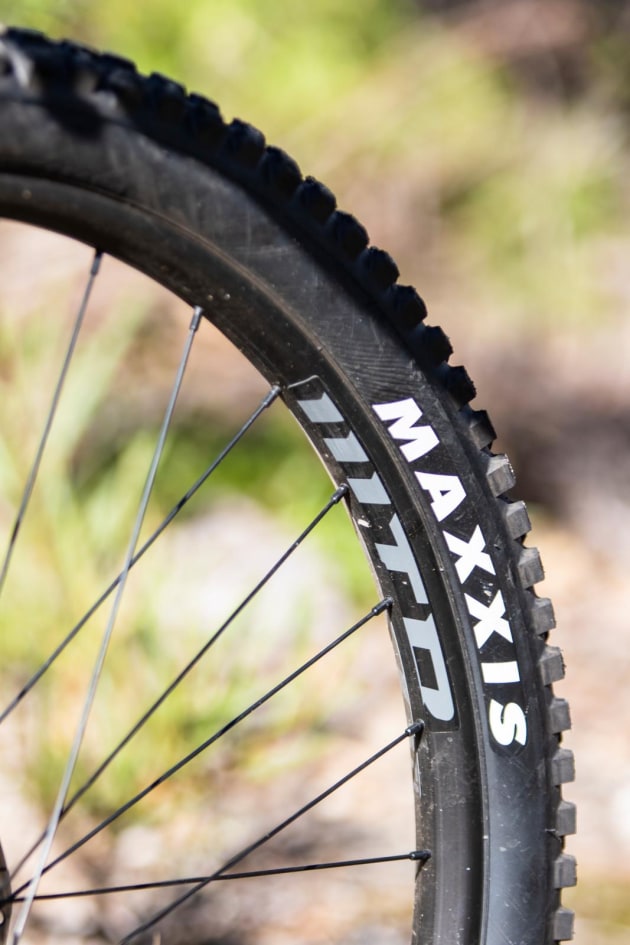 All this has resulted in a far brawnier and far longer bike, with wheelbase measurements kicking off at a not inconsiderable 1216mm for the Small, through to a monster 1314mm for the XL (the Large sits at 1280mm). Reach measurements continue the long theme; the Large has a reach of 485mm, with the XL stretching that to 515mm. However, with that steep seat-tube angle, the horizontal top tube is quite short, with the Large providing just 609mm.

The Sight VLT’s motivational force comes courtesy of Shimano’s well-proved STEPS E8000 motor with a 630Wh battery on all models except the VLT A2. This second-tier alloy model makes do with a 500Wh STEPS E7000 motor. All Sight VLT models can, however, be fitted with a range 360Wh range extender – perfect for those big days in the hills.

For that $6699 asking price, the Norco Sight VLT 29 A2 is spec’d with a mix of brands’ components that are well matched, but with the odd surprise thrown in. The 160mm front end features a short offset, no-nonsense E-Rated RockShox 35 Gold fork, with Motion control, while the four-bar rear setup includes a (trunnion-mount) Norco-custom tune RockShox Super Deluxe + Debonair. Impressively, even with this beefy shock, there’s still room for a water bottle inside the front triangle.

The one surprise is the fitment of ‘just’ a 1x10 Shimano Deore drivetrain, with an 11-42 cassette and a 32T crankset pushing it all. It’s puzzling not to see ‘at least’ a 1x11 setup fitted but, still, with plenty of assist from the motor, you do have to wonder if a wide-range cassette is a necessity. All that grunt propels the bike along the trail via Boost WTB ST i29 rims (with Shimano HB-6010 hubs) shod with tough Maxxis rubber (Minion DHF WT 29x2.5 front; Maxxis Minion DHR II WT 29x2.4 rear). Bringing this big bopper to a halt are Shimano 4-pot brakes with big 203mm rotors. The low-slung frame means the TranzX seat post sizes are generous; the Small runs a 150mm, the Medium and Large a 170mm, and the XL a 200mm. We’ve used this brand seat post in the past (it’s also fitted to the 27.5 VLT) and have found it reliable in operation. 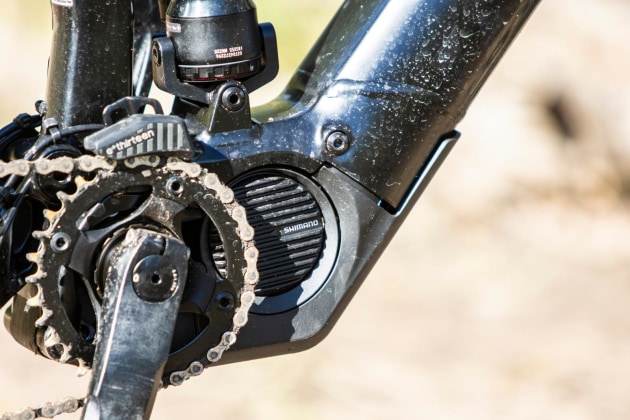 The Shimano STEPS E7000 motor and 500Wh battery on the A2 sit neatly in the bottom bracket junction and downtube of the frame. The inbuilt battery cannot be removed for recharging but there’s a charger supplied with the bike (Norco claims a 4.5-hour charge time). If you want to add the optional range extender, it fits over the top of the water bottle mounts. The E7000 is activated via a push-button positioned on the top of the downtube, while the three assist modes (Eco, Trail and Boost) are accessed via the bar-mount shifter on the left. The dropper-post switch is also on the left side of the bars, with the Shimano shifter on the right.

For the money, the Norco Sight VLT 29 A2 offers quite good value in the e-MTB segment, although you’d have to ask yourself if it’d be worth stretching to an extra $900 for the top-spec alloy A1, if only to get that more powerful motor and a SRAM SX Eagle 1x12 drivetrain.

The first thing you notice when you jump onboard the VLT 29 A2 is just how long a bike it is – and how you’re going to get it up, down and around the trails. Plus, it is heavy, although that weight issue (I mentioned it in my previous VLT 27.5 review) is not really an issue when riding as much as simple things like manhandling its long wheelbase and heft onto a car’s bike rack. Perhaps it is just time for me to toughen up.

All that is forgotten once you spin the pedals, though; the subtle way the Shimano STEPS motor chimes in to assist you is impressive and it easily negates any concerns of getting this thing up a steep climb. For a big brawler of a bike – and one that is, now more than ever, designed to propel you at not insignificant speed downhill – the VLT 29 climbs surprisingly well. That steep seat-tube has a lot to do with this; keeping your weight centred and over the cranks to optimise power delivery from your legs. It just keeps scrambling up, and up. There’s no real battle with your weight distribution and balance of the bike barring a couple of judicious moments of weighting the front wheel slightly more. Otherwise, it was a revelation on the vertical stuff – as long as you could keep the power to the pedals, it just kept going. 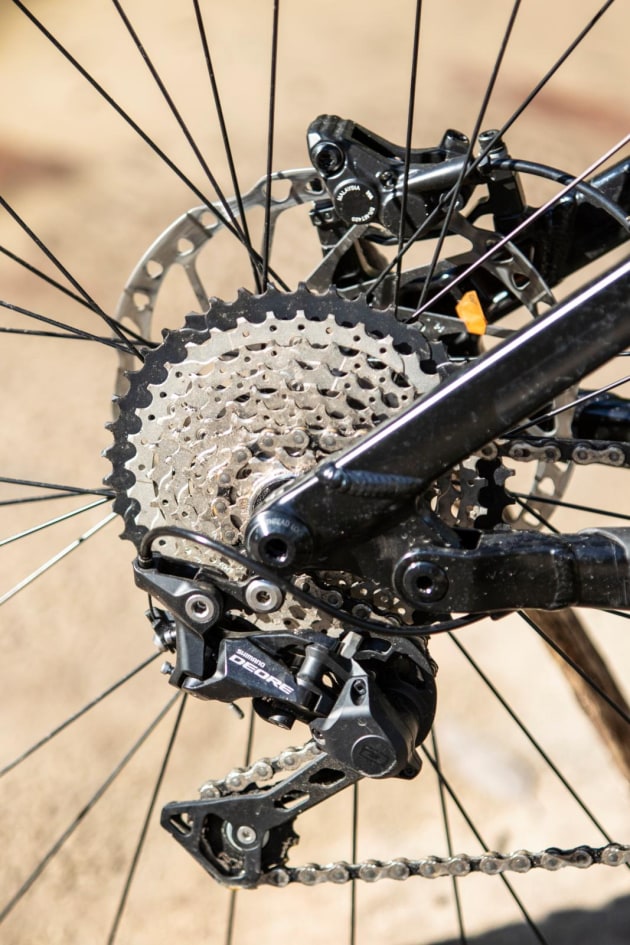 Going down was not quite as impressive. On any open, flowing trails the VLT 29 would rapidly gather speed and, with that lengthy reach, and low-slung chassis, nothing was too steep. The long wheelbase was both a blessing and a slight curse; punching over gnarlier terrain, the bike felt incredibly settled; that lengthy chainstay and wheelbase kept the bike tracking straight regardless of how rough it got under the tyres. Hit some tighter trail sections, though, and the big bus wasn’t quite as keen; that long wheelbase means you’ll need to use plenty of body language to keep it on track (literally). A few weeks on the bike was enough, however, to adjust riding style to suit but, for those looking for something nimble, the VLT 27.5 is probably the better bet. What also helped negotiate tighter track sections were those big Shimano stoppers. They really worked hard but were reliable every single time they were called upon.

The other negative – and this will always be more individual rider-specific – is how cramped the cockpit feels when in the saddle. At just on six feet tall I am no giant, but I found my knees being bumped often by the bars when negotiating tight turns, to the point where I had to allow for it when turning in, altering my approach angle to suit. When the dropper is down and you’re barrelling downhill it’s still a bit frustrating however. For this rider, a move to an XL would resolve this problem (and it’s worth noting this is not unique to this bike – other brands with similar steep seat-tubes can have the same issue). 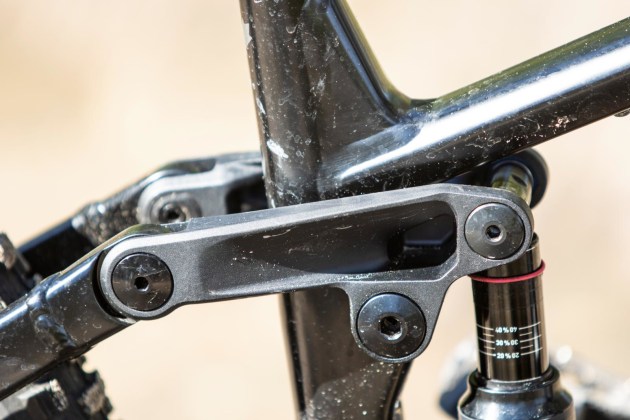 The Norco Sight VLT 29 is an impressive addition to the Canadian company’s VLT stable. It is definitely a more aggressive design than the 27.5 version but does not lose anything because of that – it will just appeal to a slightly different rider. The aggressive geometry and sheer size of the VLT 29 mean you can tackle some seriously gnarly terrain without fear, and with the added (and awesome) bonus of its incredible climbing ability. If you’d said to this tester before I rode it that the standout feature of what is a formidable All-Mountain bike would be its ascending, I would have laughed. But it is true. And this doesn’t take away from its descending performance, either, with its solid, settled feel on fast, flowing descents only offset slightly by the extra effort required when you’re in the tighter stuff. Add in the robust build, and impressive pricing – not only with this model, but across the VLT 29 range – and it’s not hard to predict Norco’s stratospheric rise up the ‘I want that bike’ charts is going to continue. 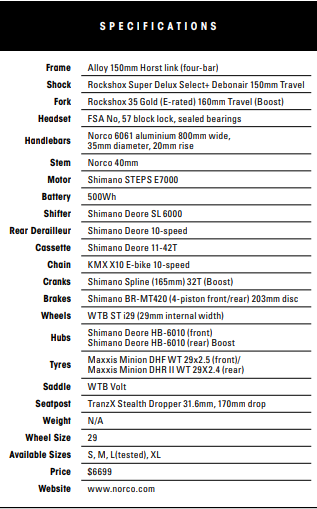