After the performance of the premium big daddy DH22s, I was very curious as to how the more budget-friendly DH34 Bike Park tyres would perform. With a recommended retail price of $69, these tyres get you into Michelin’s downhill tyre world for around 60% of the cost of the premium tyres. Add to that their promise of greater longevity, albeit at the expense of some grip, and these sounded like a very promising option.

The DH34 Bike Parks don’t offer quite as much of the high-end tyre construction technologies that you find in the Racing Line. They’re made from Michelin’s Gum-X rubber, which is a slightly harder compound, providing longer wearing but less grippy characteristics. The tyres are tubeless ready, of course, and reinforced at the beading. With Michelin’s Gravity Shield casing, these are also a 4-ply tyre but at a 33tpi thread count. That lower thread count suggests the tyres should be less supple and heavier, as well as very strong, so I was surprised to find that they weigh in substantially lighter than the DH22s. At 1270g per tyre, they’re still a solid slab of meaty rubber, but that’s not at all unreasonable for a tough, gravity-focused tyre. 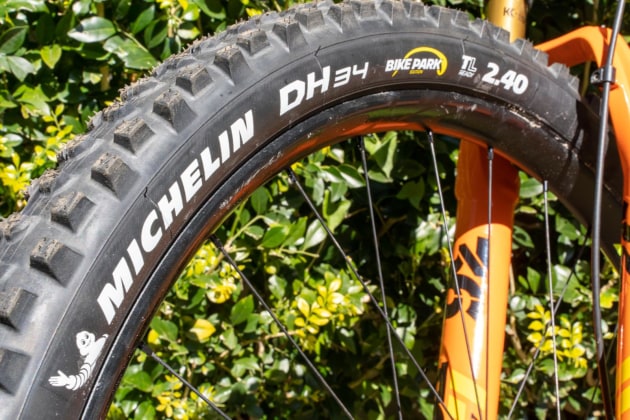 Like the DH22s, there’s just a single tyre width on offer – 2.4” – and these are the same tread pattern front and back, rather than differing front and rear versions like with Michelin’s Wild Enduros. The knobs are not quite as prominent on the DH34 Bike Parks (although that’s speaking relatively – these are still a chunky looking tyre), the profile is a bit squarer, and you can see from the tread pattern that these are designed to roll a little better than the DH22s.

Getting the tyres onto my wheels was somewhat easier, and I managed to get both tyres seated tubeless using just the floor pump. The sidewalls are noticeably more flexible to the touch than the DH22s, which I think accounts for them being easier to get set up. After a little experimenting, I wound up running these at a pressure of 24psi front and rear, and they lost almost no air between rides.

Although Michelin positions the DH34 Bike Parks as focused more narrowly just on hard-packed/bike park terrain, I actually found them to be super versatile. Most of the testing was done in and around Canberra, at both Majura Pines and Stromlo. Both trail areas have plenty of sharp rocks and let you build up some serious speed, so tyres can really take a beating. I had no issues at all with the DH34 Bike Parks in that respect: the sidewalls took some pretty big and fast hits on rocks, but didn’t miss a beat. 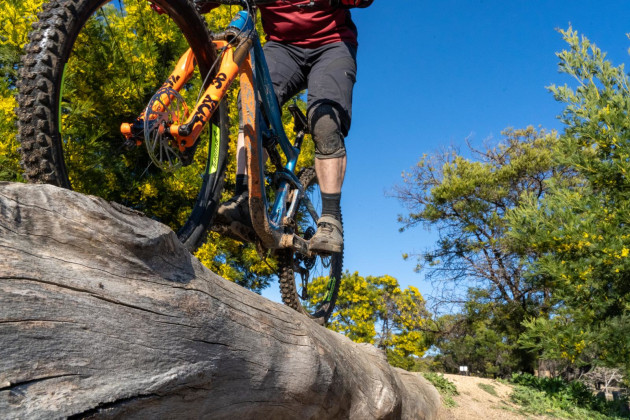 Majura had seen some rain in the couple of weeks before my time there, so while most of it was fairly dry, there were also some wet and muddy areas as well as plenty of soft soil. Despite their seemingly narrower design-brief, the DH34 Bike Parks provided excellent grip and traction across the whole range of surfaces. What’s more, they were surprisingly fast rolling considering their intended use. Majura punishes the legs with some decently steep climbs around tight switch backs on your way up the hill, and I was perfectly happy riding the DH34 Bike Parks up those trails for several hours: that absolutely would not have been the case with the DH22s!

At Stromlo the DH34 Bike Parks were right at home. With the benefit of the shuttle service, I could do a bunch of downhill runs without getting tired on the way back up, and as I became more familiar with the tyres I found myself pushing harder and harder, managing to set a few PBs on the way down. Around berms, landing jumps or ploughing through rock gardens, the DH34 Bike Parks gave me plenty of confidence. Ultimately, they’re not as grippy as the DH22s – I did manage to wash the front out pretty spectacularly at one point, but I think this was more rider error on my part than the tyres – but if you stay committed and keep them weighted, the tyres really will hang on.

I haven’t yet put enough kms into the tyres to test out Michelin’s claims of extra longevity for the DH34 Bike Parks, but after multiple rides in some very rocky terrain, they’re still looking like new. 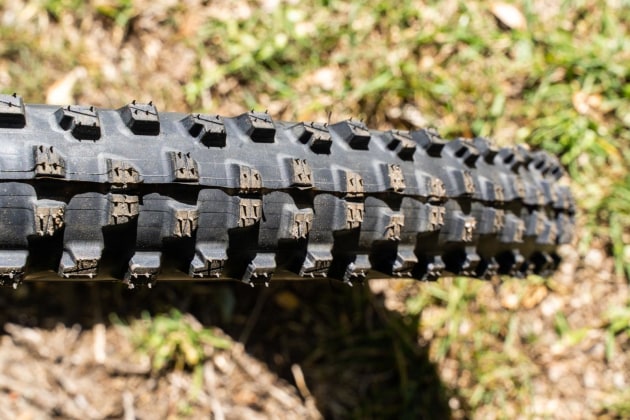 I actually think Michelin are selling these tyres short positioning them as specialist bike park only tyres. My experience with them was that they are happy operating across a much wider range of surfaces, and you could even justify using them as a heavy-duty trail tyre that can be pedalled uphill as well as fanged down.

The DH34 Bike Parks? In my experience, they overdeliver. At a relatively wallet-friendly price point, they provide excellent grip on different surfaces, are built tough and can take a beating. And if you need to or want to pedal them uphill, you’ll be pleasantly surprised. 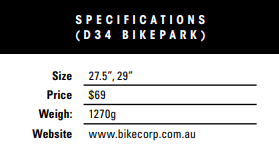