The Obesity Cyclist - PART I

They say the Welsh can sing. For decades I’d happily sung songs to the wind, whether from the saddle of a bike, the seat of a kayak or sliding on skis. I made up words and tunes that probably had no real rhythm at all. I sang across deserts, oceans and mountains and it all seemed quite acceptable, quite normal. At least to me.

Here on Canada’s High Rockies Trail my songs seemed forced and unnatural. “Make lots of noise on the trail,” I’d been told. ‘Sing, shout, sing,’ I’d read. This all to forewarn any bears in the area. So I sang as I rode on this, my first visit to Canada, my first time riding a fat-bike. 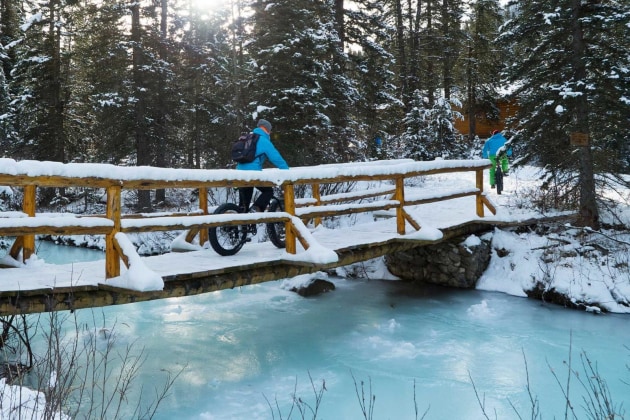 Scared as I am of animals - I’ll walk across the road to avoid a poodle – I think it somewhat energising when we’re in the outdoors and not top of the food chain. As with Australia, Canada has it in spades – grizzly bears, polar bears, wolves, cougars, moose and more. Much as I love NZ (and I really, really do) it’s a little mundane at times knowing nothing is going to take you down, eat or poison you.

“Got you a nice new Trek Farley,” said Tyson, the owner of Rebound Cycle in Canmore. An imposing figure, I reckoned he would could easily go at least a couple of rounds with a grizzly. I was in the Rockies in late autumn and Tyson was getting his hire fleet ready for the winter snows. Fat-bikes would seem to have two main uses – riding snow and riding sand. I just wished they’d been around when I was pushing and pulling 2-inch tyres across the Australian deserts. 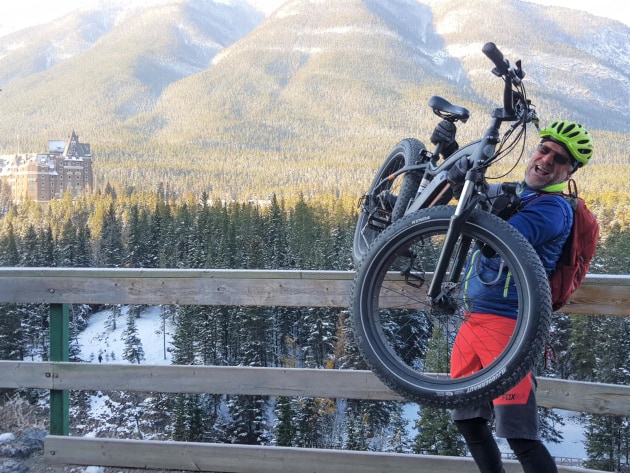 From the shop it was a short ride to the Canmore Nordic Centre where a huge network of MTB trails took off from very flash trailhead facilities. All courtesy of Canmore being the Nordic skiing venue for the 1988 Winter Olympics. In winter it still provides world class ski facilities and indeed on one trail I found the way ahead blocked by huge mounds of snow. Rather unbelievably they store snow from the previous season under a thick cover of sawdust right through the summer months. All so they can start building an early snow-base in the autumn.

As I hauled my fat-bike over the mountain of old snow, I was reminded of what I saw one time while ski touring through Zanskar in the Indian Himalaya. We came across a village surrounded by snowy fields where soil had been scattered over the top of the snow. In springtime the villagers consult the oracles as to whether they believe there will be another major snowfall. If not, then piles of soil kept on the edge of the fields are dug out and scattered across the snow. The dark colour heats up during the day and melts the snow underneath. In this way the fields are cleared of snow quicker in order to plant potatoes for the very short summer growing season of the Himalaya. 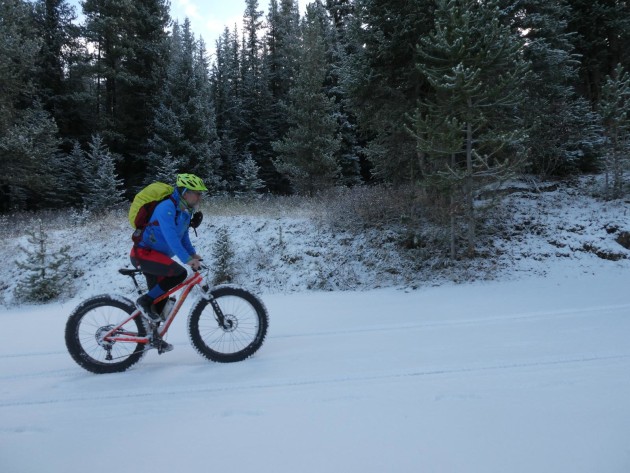 Looping around on the singletrack, the 4.5inch tyres on the Farley bounced off everything. It was all rather fun right down to my favourite sign that instructed me at one junction to ‘Bear Left’. When I did climb a little higher, the fat-bike brushed off any snow on the trail with disdain.

Well satisfied I raced, as fast as both fat tyres and legs would allow, through Canmore to make it to the Sheepdog Brewery before closing. “Leave your bike in here,” instructed the Head Brewer, pointing to the brewing room. That done I headed to the upstairs bar for a glass of the fittingly named Long Travel Ale. 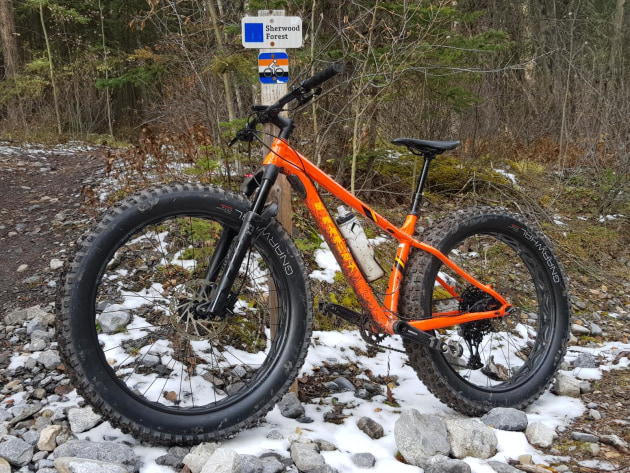 As I rode back through the streets to very comfortable digs at the Falcon Crest Hotel, I thought, on this Canadian Thanksgiving night, of all the families starting to tuck into dinners of maple bacon glazed turkey and pumpkin pie. It got me thinking about the obesity crisis sweeping so much of our world. Much to do with diet, perhaps more to lack of exercise. Cycling has long been recognised as one of the best forms of exercise for health and weight control. But where are we heading as an activity?

That question and more will be answered in Part II.