What's the grind with gravel?

There’s absolutely nothing at all new about riding bikes offroad, even bikes with skinny tyres and dropped handlebars. Cyclists have been doing just that ever since bikes were invented, and way before surfaced roads became popular.

Even the original Tour de France was in no small part held on dirt roads. Over a hundred years ago riders scrambled their way through the wilds of the Alps and Pyrenees, and they raced on single speed bikes with rod brakes for hundreds of kilometres a day. This was, of course, long before the advent and sanity of the modern uplift.  So, just how is it that gravel riding and gravel bikes have taken off to the extent they have in recent years?

The term “gravel bike” is new; that’s for sure, and it was probably something that came out of an après trade show re-grease at the bar. As absurd as it may seem that simple re-branding of good old “rough stuff“ was, it stuck. Not only did it stick, it became de-rigeur with long bearded men in turned-up peaked caps, and then went it mainstream – a bit like an un-original indie band who suddenly became a pop sensation. Either way, however it happened there is little doubt that gravel bikes and gravel riding have given the bike industry a welcomed and potent shot in the arm, and (in my opinion) riding skinny tyres offroad is not a flippant trend that will fade away faster than a Bulla hat from the early 1990’s did. Gravel is here to stay and is fully open to your own interpretation.

As someone who has been riding bikes “seriously” since the days of punk rock & flares I can testify wholeheartedly that bikes have progressed and transgressed more in the last 20 years than could even have been imagined, as have most things in life. Like many I was raised and grazed riding all kinds of two-wheeled trashcan contraptions offroad, long before mountain bikes even existed. Back then it was road and cyclo cross for me, and my personal tendency always learned towards the dirty side. It was usually minority groups of older men in tweed plus fours and with long beards (what goes around…) who took on the serious off-road challenges, often pushing their steel touring contraptions for hours on end along mountain trails that we’d smash down in minutes on modern mountain bikes.

Ironically it’s those early Rough Stuff Fellowship pioneers and their beards that were once considered as the mainstream untouchables of cycling who are now seen as the early trendsetters – a retrospective label they fully deserve.

With my own distinct attraction to riding remote trails there was no surprise that when mountain bikes first came around that I had to have one; a steel and fully rigid Raleigh it was, and something more akin to a garden gate when compared to modern rides. Either way, it opened up a whole new world to me. Trails that were simply inconceivable on a big geared cyclo cross bike suddenly became viable.

Mountain biking was fresh and the trails were uncharted (by bike). The cycling world was suddenly like a great big oyster of adventure and dirty opportunity and ratting over those trails with teeth chattering and toe clips scraping the rocks, ahh, what memories.

The sport was so far removed from the regulated and traditional luddite ruled world or road cycling. Mountain biking was rebellious and free; a sport without a jaded history, and it came with few rules and bags of potential.

Well, then things changed; some may well think that was for the good, me – not so much. The UCI took over the show as far as racing went (which was an inclusive and big part of early mountain bike culture) and the whole sport took on a more serious persona, or at least from a racing point it did. That’s not to say that you can’t still go out there in dayglo shorts and have fun; it’s (and maybe we are) just a little bit more grown up nowadays.

Well, that’s where gravel grinds its way in through the back door. Currently the gravel riding scene is somewhat free and easy going, and has a real community feel to it – hang on, isn’t that a bit like mountain biking was back in the day?

Sadly (but predictably) the blazers of the UCI seem desperate to stage a dirty coup and take over the gravel racing show, which I’m sure that in part they will succeed in, although I very much doubt that they will spoil the fun too much this time around (Yes, that’s racing; but rules is rules, and they generally filter through and standardise things).

Gravel bikes come in all sorts of shapes and genres, which is great – as there really is something for everyone, or at least there soon will be. Traditional manufacturers have largely gone with a predictable cyclo cross based approach whilst others have approached grave bikes with a more laid back and adventurous style; heck – there are even full suspension gravel bikes out there now.

There is no arguing that gravel riding and gravel bikes is commercially trend driven, and yet it really does have substance and foundation to it. I ride bikes almost every day, and mostly offroad, much as I have done for decades. As long is it has a saddle and wheels I don’t much care what’s holding them together, it’s all about escapism and the ride, which gravel offers in abundance.

For years I’ve spent much of my time travelling and earning my crust by riding bikes in weird and wonderful places and then telling those tales and showing pictures in print magazines. There’s an ever-growing selection of bikes gathering dust in my back room, and for maybe 15 years or so I’ve mostly stuck to two older titanium bikes for my travel, and every day riding.

One of these is a rigid 26-inch wheel mountain bike, the other a touring bike with lowered gears on – my own original pre-gravel machine. The only thing that flips my coin when choosing which to travel with was what images I needed; road or MTB. Both bikes are capable on or offroad, with obvious specific strengths and weaknesses going to both.

When gravel bikes first became a thing I desperately tried to get hold of one, and eventually did so – four years ago. It is a tad too road orientated for my liking, but with disk brakes and lowered gearing it has become my go to ride for just about everything now.

Gravel bikes run smooth and fast on road and turn smooth flowing trails into nail biting roller coaster rides. They rattle your bones and make you grin on technical sections and force you to think about and plot every move. They take you further than you would ever consider on a modern mountain bike, and to places you could not even entertain on a road bike. The sensation is a little like that of a 90’s rigid mountain bike, only you have dropped bars and are more limited on technical sections and steep climbs. Riding gravel (although I ride mostly regular trails) has really put the fun back into riding bikes for me. I find myself going out and looking for (and finding) new trails and routes locally that I didn’t even know were there. These are trails that would be boring on a modern mountain bike, and yet are great fun on a gravel bike. 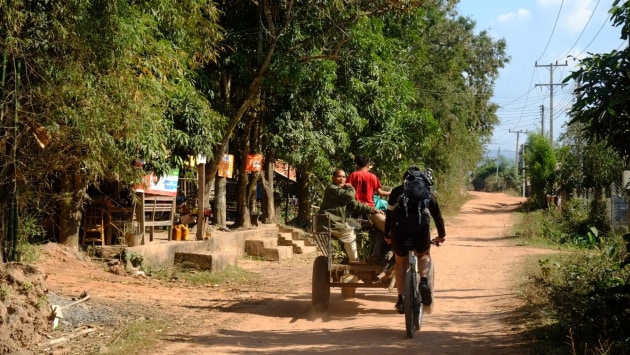 Do you need to rush out and but a gravel bike? Err, hey – we all love bikes, and if you can afford it and chose the right bike and then pimp it out from the get go then why now. Otherwise you could always dig out an older 90’s style rigid frame and convert it (which I intend to do with my older Litespeed).

Dedicated gravel bike or not, lock out your shocks and give the retro approach a go – it could well put the fun back into your every day riding. Remember that speed isn’t necessarily everything; there’s a kind of fulfilling Zen like purity to plotting a line and feeling out a trail, which will also go a long way towards sharpening your skills when you do hop back on a regular mountain bike.