1. Getting Started
It sounds obvious, but actually requires a bit of thought. First up, you might be thinking you need a different bike to your normal ride. While a hardtail, dirt jumper or BMX might be the weapon of choice for those dedicated to racing pump tracks, all you really need to get started is the bike you own now.

If it’s a full suspension bike, the suspension will soak up a bit of the effort you put in, so lock it out if it has that facility, or if you have air sprung suspension, put some more air in to decrease sag and minimise the effect of the travel. Put the seat down all the way to make sure it’s well out of the way of your core as you pump over things. If you do have a hardtail BMX, dirt jumper or even a hardtail mountain bike, the lack of suspension allows you put a lot more speed out with the same effort, as the suspension isn’t soaking up your effort. 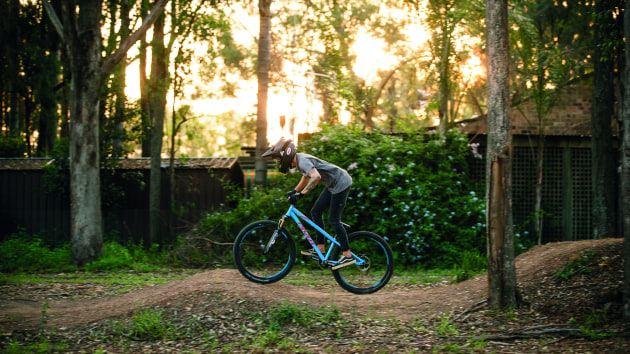 2. Where to Pump
Next, you need a pump track. There are plenty of new tracks popping up, both dirt and asphalt. A BMX track is also a good place to start learning skills, but these aren’t normally set up for continual loops and are usually a lot longer, with bigger jumps, rollers and berms than what you’d find on a pump track.

Arriving at the spot, if there’s riders already there, pay attention to which way they’re riding around the track, as some are better ridden one way over the other. But you'll find most should be designed to be ridden in either direction and it might just be faster or more fun riding in one direction over another.

3. How-to
The aim of the game on a pump track is to generate speed without pedalling. How you do this is by 'unweighting' or lifting the bike up the upward ramps of the rollers and/or jumps on the course and weighting or pushing down on the downward slopes of the rollers/jumps. The better you can time the movements and the harder you can push, the more speed you’ll generate. It’s quite surprising just how much speed you can generate.

Your body should be in attack position - standing low over the bike with your butt just past the seat and your head close to an imaginary vertical line from the top of the stem cap. Keep your body loose, look forward and try to keep your core/torso still as your arms and legs move with the bike. Arms slightly bent with your elbows out, BMX style, to allow the best range of motion in the arms, and feet flat across the pedals while on the straight sections and outside pedal down around corners to maximise traction. 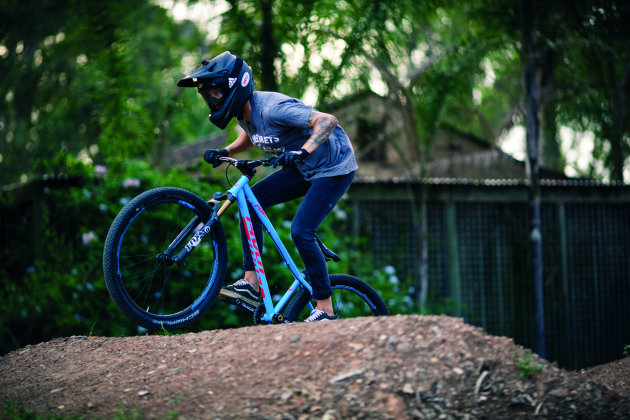 Start off slow and as you approach the rollers, stay loose, let the bike come up over the roller by bending your arms and legs and once you’re past the top, push down with your arms on the bars to generate speed up front, and once the rear tyre reaches the top, push down with your legs to do the same with the back wheel. You’ll usually generate a lot more speed with your legs, but with some practice, you’ll also find the arms can generate a lot of extra speed if you get the timing right.

4. Cornering
With corners, your aim is to exit with the same or more speed than you entered with. Look beyond the exit point of the berm rather than where you’re pointing so you can focus on where you’re exiting the corner. Berms will naturally allow you to hold speed as they get bigger, as the angle of your tyres on the camber of the berm lets you carry more speed safely. However, be careful not to go over the top or try to go too fast on the very inside of a berm where there’s no camber to help you. 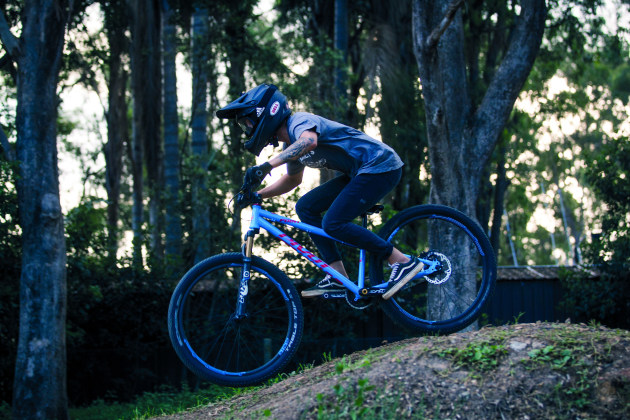 5. Building Confidence
As you progress, there are also a few advanced techniques you can try that allow you to generate even more speed or style. Bermed corners can be thought of as rollers turned on their side, so you can pump into the entry as if it were the backside of a roller to generate more speed. If you can pull the front end as you do this there’s also the potential for style points with a manual on the exit of the corner!

Also, in between smaller rollers, if you can keep the front end up and pump with the rear you can manual between the dips - also a good style option! A lot of pump tracks also have rollers that can be used to jump into the next, either a double with one gap or even a triple over two gaps for those really advanced riders. Creative line choices are also an option on some pump tracks, as there are multiple lines around certain courses. You could even get creative and hop from one line to another with a transfer jump or use an inside-facing berm as a jump instead.

Basically - don’t be daunted and get pumping!