Bike to the Future

It had been a hell of a climb, and doing it under the heat of the brain-frying afternoon sun hadn’t helped. Stinging eyes viewed the last rise through salt-stained sunnies and, when I finally reached the top, I collapsed onto the grass under the welcome shade of a snow gum. Eyes closed, my mind drifted off...

The year is 2030. Personal responsibility is long gone. Orwell didn't know the half of it when he wrote 1984. Adventure was a concept talked about by an earlier generation, read about in yellowing copies of old magazines with titles such as Mountain Biking Australia and Freewheel. ‘Free’ was a word lost to the past. Nothing was free these days, either in cost or choice.

Despite this, and despite a world dominated by chair-based virtual entertainment and automated transport, certain activities involving real effort had somehow survived. Mountain biking was one. Of course, what constituted cycling was now blurred by the rivalry between The Pushers and The Pulled. The Pushers are a ragtag bunch who maintained that riding had to be done under one’s own steam. The Pulled were a government approved group of power-assisted riders, who had implanted electric motors into their calves. The Pushers were fighting a losing battle, as more and more mountain bikers realised that the effort of forcing themselves off the sofa and into the saddle could be shortcut by this assisted riding. 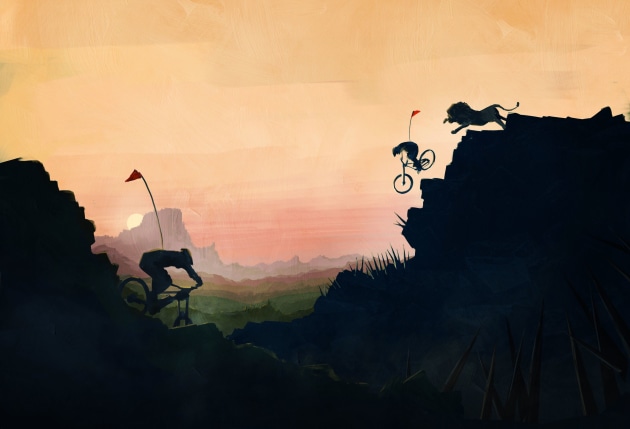 Road cycling had been outlawed for many years, following legislation banning two-wheeled transport from any sealed roads.
In 2030, the vast majority of government-owned land - national parks, state forests and the like - were closed to all but highly regulated guided tours. Despite encouraging signs early in the century of a turnaround in the relationship between public liability and personal responsibility, a series of accidents involving high-profile media magnates and their offspring killed that momentum stone dead. With the government now taking instructions from the media, it was only a matter of time before all similar activities became severely restricted if not banned outright. Mountain biking was lucky to still be permitted in any form, but climbing, skiing and all forms of kayaking have been totally banned.

Although allowed on the Australian mainland, illegal mountain biking actions still leads to huge fines. Predictably, there were a number of riders who, unable to pay the exorbitant fines, lost their homes and, in some cases, their families due to non-payment. Cruelly, the Department for the Regulation of Outdoor Activities claimed that any fines collected were 'used to promote the participation in and understanding of the benefits of non-virtual reality based outdoor activities.’

The media-controlled political coalition have reserved some areas of the country where MTB activity is permitted. However, most of these areas are distant from the population centres and a national selection process is held annually to determine who can ride in these areas. Even entering the lottery involves paying a non-refundable fee of $3,000, and just 15% of riders who apply are successful. Riding in real MTB conditions has become the preserve of a wealthy and privileged few. Even within these dedicated reserves, the rules are almost innumerable, with the wearing of body armour and full-face helmets mandatory despite the fact the trails generally offer easily-graded dirt, with rangers patrolling weekly to remove rocks, roots, logs - anything that could cause a rider to come off. There's also a requirement to carry a tracker device which constantly transmits the rider’s position, and all must legally carry an Epirb and a satellite phone. Each rider must place a $100,000 government-imposed bond in case of rescue or retrieval.

However, there is resistance. Tasmanian authorities, part of the federal politico-media’s so-called 'Axis of Evil', has rebelled against the restrictive practices embraced by their big brothers to the north and allowed a number of activities to continue. Whilst this has led to the first ever net positive migration over to the Outdoor Isle, the economy has remained sterile, as all mainland states and the Commonwealth have imposed crippling sanctions on Tasmania for this and other such behaviour. No airlines are licensed to fly there, Commonwealth grants have been cut off, oil imports are to this day embargoed and massive legal bills have decimated the economy.

Everyday life was hard in Tassie, with food rationing and power cuts widespread. Global warming and the huge subsequent reduction in rainfall has decimated the local hydro-electric industry. However, many so-called 'ferals' and anti-technologists have migrated across the Bass Strait to enjoy the freedom of the trails and the mountains. Despite this, it's only a matter of time before the state implodes completely and the rest of the nation aims its weapons of mass compliance at the island which the media has nicknamed 'comply or die'.

Those brave mountain bikers still hammering the trails around Tassie are seen on now ancient pre-2010 clunkers, with their quaint hanging derailleurs and narrow saddles. Elsewhere in Australia, all new mountain bikes have computer-controlled gearing and suspension, ergonomic comfort seats and low resistance hover tyres. Each bike has to be registered, insured and have complete back-up brake systems. Any mountain bike more than two years old has to pass a trail test to ensure compliance with government regulations. Any bike older than five years is destroyed by decree, although some were sent as part of Australia’s overseas aid programme to the UK and USA in 2022, as they both struggled to get back on their feet after the Trump and Brexit-triggered civil wars. 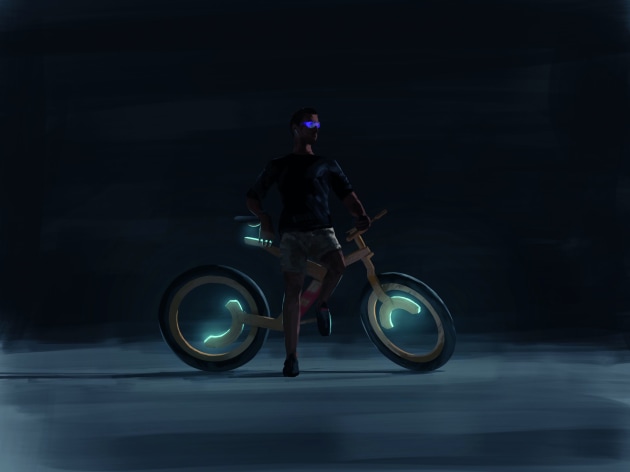 There's still an official MTB race scene of sorts, although to take part involved breaking much more severe rules than riding a mountain bike against regulation. The national MTB series is now, like many other sporting events, only for the lowest of the low: murderers, rapists and other violent offenders. The races involve head-to-head competitions between pairs of criminals down courses that consist of mammoth cliff jumps, spiked courses, firing ranges and lion pits, where the way out is closed at predetermined times. Those riders who survive do so only to ride another day and death or permanent disability was the only sure result. These contests are beamed into home across the country, and viewers revel in the riders' misery and misfortune. Not that the government minds - the whole macabre spectacle serves to free up space in the prison system and state TV benefits from massive viewer numbers tuning in to the weekly death races.

Despite all this and against better sense, the MTB community nationwide resists in any way they can, establishing a substantial underground movement to continue to do what they love. Encrypted messages circulate daily on riders' mobiles, informing them of the the next ride's time and location. Due to the risk involved, these rides are invariably at night. Small groups of the Pushers clamber over national park fences to feel the freedom of the ride as they career down dangerous and overgrown tracks. The Pulled, on the other hand, are seen very rarely now on the underground scene, with many at best having their bikes destroyed during rides, and at worst being severely beaten. The groups are invariably led by a craggy-faced and still well-muscled rider in their 60s or 70s. These old school warriors serve as the repositories of knowledge from the days when the trails were open and the hills were free. They tell stories of disappearing for weeks back in their younger years, riding through the bush, carrying everything they needed on their bikes. They tell of races and events attracting 1,000 or more like-minded souls, happily streaming their way through the night on long circuits through dark forests, or finding their way through mountainous terrain searching for that perfect vista, all with a few beers and lot more laughs at the end of proceedings.

Many in this underground MTB movement are happy to just ride when they can, all the while keeping their eyes and ears open to avoid detection and the huge fines that come with the punitive new system. But others have gone further, their anger at the compliance of other riders fuelled by the progressive wrenching away of their freedom. They've sabotaged helmet factories, cut up tracks in MTB reserves and felled trees to block access to routes. In one particularly severe incident, the Minister for Sport's daughter was kidnapped in an attempt to obtain concessions for more free riding. Of course, it had the opposite effect, and the backlash was severe. What followed was a further, harsher crackdown on illegal riding, and the kidnappers were sentenced to life in prison. However, before they walked the green mile, they were forced to compete in one of the televised weekly death races. None survived. At least they died doing what they loved.

My eyelids heavy, the light creeps into my vision. The sun had sunk low and flowed under the snow gum canopy across my tired body. The mosquitoes had taken over from the flies for the night, targeting my ankles and neck with relish. I slowly come to and realise it was a long way back to camp. I brush the grass from my knicks, smile and get back onto the bike. As I darted left and right down the mountain, the memory of my dream began to crystallise. I begin to smile, revelling in my renewed freedom to ride.