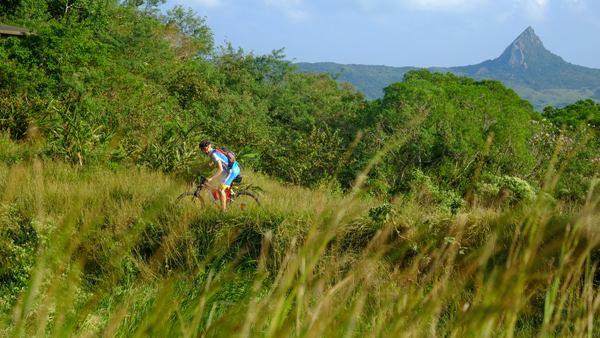 My camera was shaking almost as much as I was from the supressed laughter, but I had to try to hide it. My ride guide Cam was attempting a relatively straightforward manoeuvre around an uphill corner, but he just couldn’t keep his front wheel on the ground and kept hurling himself off the back. To be honest, it wasn’t even a great pic but I was having way too much cruel fun watching and had to keep asking for one more shot.

We were wrangling our way through an overgrown hillside on the outskirts of Kenting, a picturesque national park area in the deep south of Taiwan. Lush and lightly sun-toasted greenery surrounded us, while a huge cone shaped mountain loomed above. 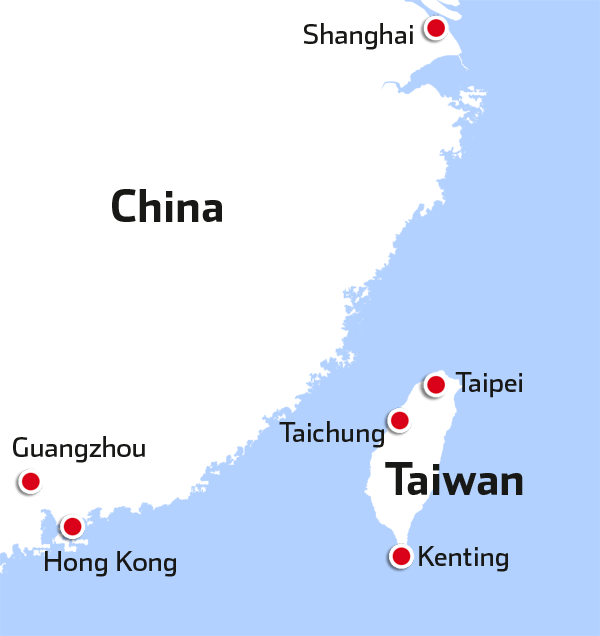 It was a total contrast to the mountainous moonscape that we’d been through a day prior, in the rugged central core of the island. Taiwan has some 286 mountain peaks over 3,000 meters high. These are crammed tightly into a 400km long slice of land, making it the most densely mountainous country in the world. For many Taiwan conjures up images of smog-filled cities, busy factories and towering skyscrapers. While that side certainly exists, you don’t need to venture too far to see a natural and relatively untouched environment.

The central region features stunning big mountain scenery with remote and raw riding on old army routes and village paths. You’ll find yourself negotiating swinging suspension bridges, barren scree slopes and trails that cling to the mountainsides with nothing between you and a huge drop to the valley below.

Kenting on the other hand is warm, tropical and green. Located at the far southern end of the island, it is fringed by aqua blue Pacific Ocean. It’s easy to see why this place was such a popular holiday destination for local city dwellers, although few of them venture away from the inviting coastline. 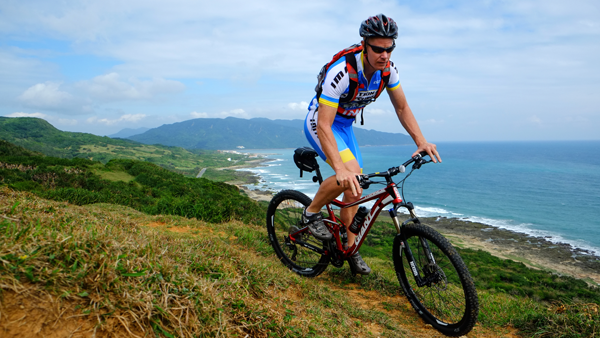 Our goal was to make a semi-circular loop around the foothills behind the coastal resort town of Kenting, and then to follow craggy coastline back to town. Even with Cam’s guidance the route took some trial and error, but that’s all part of the adventure in Taiwan. Compared to road cycling, mountain biking is in its infancy here and you won’t stumble across mapped out IMBA standard trail networks. The riding has to be sought out but the terrain is undoubtedly made for it.

Somewhere along the trail we became slightly lost, but not too far out—the landmarks are pretty obvious and served as a good guide. There was one rather surreal moment however; we’d been rumbling up a rock-strewn and overgrown climb, dodging the overhanging branches when one of the branches stepped out in front of us. We then became aware of the many sets of eyes peering out of the dense undergrowth. It turned out to be a group of young soldiers out on an exercise in camouflage, or at least I hope it was and not some bizarre delusion.

Wending our way through picture perfect farmland and desolate stretches of open moorland, we eventually linked the trails together and made it to the coast. A narrow animal-made singletrack trail then carved its way high above the towering coastal cliffs before diving down towards the road beneath us. Now we were on the southernmost tip of Taiwan—an imposing place to find yourself on a ride. The wind howled around us and the waves crashed hard against the rocks beneath. Clear blue skies and perfect sunshine gave the scenery that extra special glint, making sure that it was a ride to remember.

The ride back towards Kenting town was a stiff grind into the lashing wind, but as we dropped down from the tip and into the sheltered bay area, the sun set over the water, marking the perfect end to a quite unexpectedly scenic and adventurous day’s ride out.

For me this was the end of two weeks’ exploring around ‘Isla Formosa’. The country, the people, the culture, the food and the riding had been so much more, and so much better that I’d anticipated, which is always a great place to leave things. 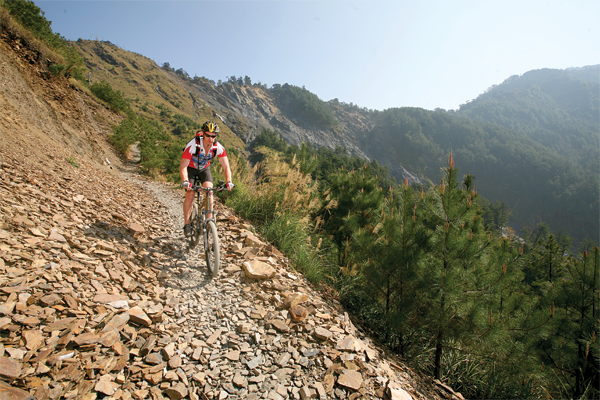 Weather-wise Taiwan has it all. The mountains often get misty and rainy in the afternoons and it can get really cold too once you at higher elevations. Down south near Kenting it’s quite warm and tropical year round, with most seasons achieving daily maximums in the high 20s.

In general Taiwan experiences rainy summers and pleasantly cool but rainy winters. Between late May and late September is rainy season when typhoons can blow in from the South China Sea; they bring high winds and damaging torrential downpours. Outside of that time you can expect fairly good riding weather.

Early March sees the staging of the Taipei Cycle Show; one of the biggest bike trade shows in the world. It’s largely industry driven but being six months ahead of the other major consumer shows can be a great place to see what’s is coming for the following season. March is also a great time to ride in Taiwan, particularly in the central and southern regions, which receive less rain than Taipei. 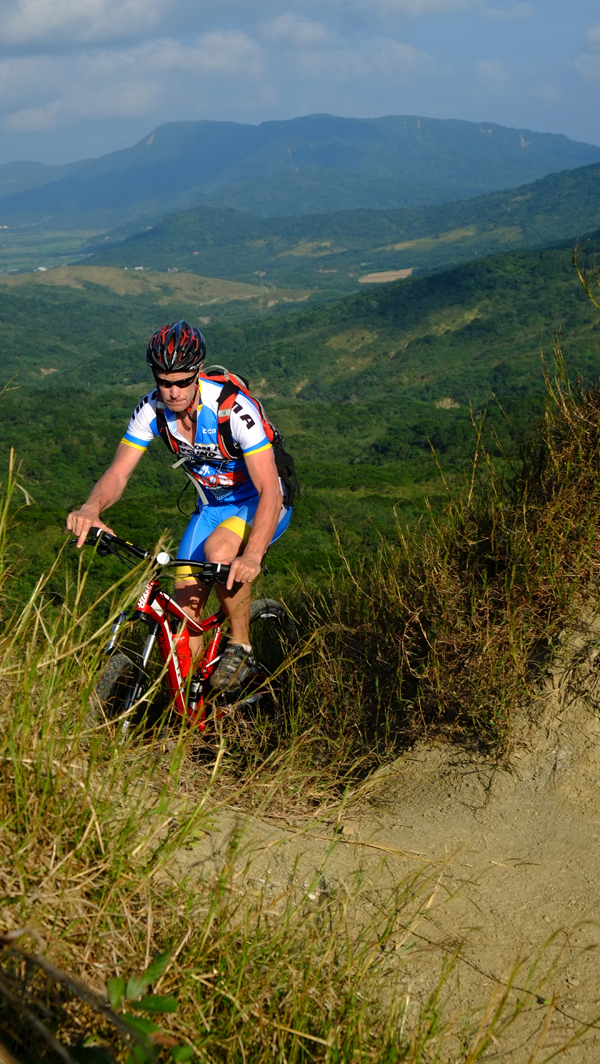 Getting to Taiwan is very easy, as numerous international airlines serve Taipei directly from Australia but be sure to check bike carriage policies if you plan to take your own wheels along.

Taiwan is very safe and regulated, so getting around is a breeze compared to most Asian countries and its not expensive by Australian standards.

There is a good domestic air network but most people use the regular trains or high-speed rail (HSR) links instead; they’re almost as fast, cheaper and more frequent. Bikes are restricted on some services however, so you do need to check in advance. 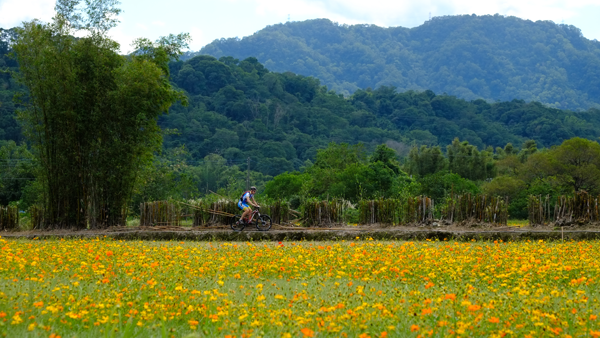 You can find more info about getting around with a bike at www.taiwanincycles.blogspot.com (best to search within the blog for ‘Railway Administration Policy’).

Compared to Australia the cost of travelling in Taiwan is very low, although it is more expensive than many parts of Southeast Asia.

You can find great deals on accommodation with online booking agencies, or outside of peak holiday seasons you can opt to take your chances on arrival.

The Taiwanese love to eat, and they seem to eat all of the time. Every region has its own specialities and the quality is always high. You might find the dishes a little less spicy than you would imagine. In major towns there are also plenty of western eateries. Restaurants often close early with last orders at 9pm, so be sure not to get caught out.

Beer is also good; Taiwan Beer is nice and the ‘Gold Medal’ version is especially good. There’s also no shortage of tea and also decent coffee; every 7-11 store has fresh coffee.

If you happen to pass through Taichung (which is the capital of the world bike industry) then drop by Caffe Terry, a cycling themed coffee bar and restaurant which is frequented by the local cycling and bike industry communities. You’ll find it at 422 Da Ying Street Nantun District, Taichung City.

With a large chunk of the world’s bikes and parts being produced in Taiwan, you won’t struggle to find a decent bike shop or repair facility. Don’t expect to find a bargain though, as the retail prices for branded products are similar to Australia.

If you don’t want to take your bike along then you should check out the huge Giant bike rental network. You can hire mid-grade bikes all over the island and even do one-way rentals if you’re planning a tour.

Possibly the best dedicated mountain bike shop on the island is Alan’s (www.alansmountainbike.com.tw).

You’ll find lots of great riding areas all around Taiwan. Many of the best trails are on the outskirts of Taipei itself, so they are easy to access and they are usually quite easy to follow too.

There are some epic rides in the mountains inland from Taichung and great rolling natural trails around the Kenting coastline as well as its interior hills, although they are not well mapped—you’ll either need to follow your nose or enlist the services of a guide. If you’re looking for a supported or guided option the check out In Motion Asia; www.inmotionasia.com

You will find numerous maps for leisure and road cycling in Taiwan, but mountain biking on the island is still relatively untapped, and thus also somewhat uncharted.

A good place to start, and perhaps the best place for rental bikes too, is Alan’s Mountain Bike shop in Taipei. Alan is a keen rider, and shop rides are held on several days each week. The shop website is also great for trail and ride info; www.alansmountainbike.com.tw

There is also a lot of good trail info on the Formosan Fat Tyre Association website at www.formosanfattire.com. Unfortunately the website has been closed for many years now, but the trails section remains useful and does get updated from time to time.

For general cycling information have a look at www.bike2taiwan.net and be sure to check www.taiwantourism.org  for a general overview and introduction to Taiwan. 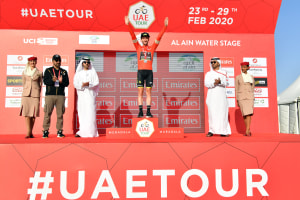 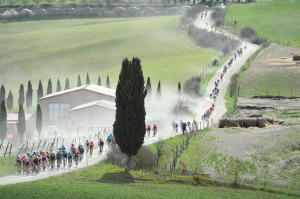 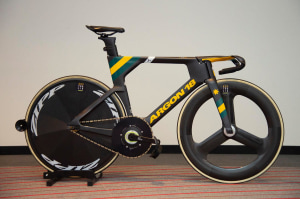